Off the Hook Arts and Stanley Live are teaming up once again to bring you the very best in Contemporary live music. Triptych Jazz Trio consists of violinist Zach Brock, bassist Matt Ulery, and drummer Jon Deitemyer.

As a compositional collective they are creating new repertoire that draws on the traditions of jazz, contemporary classical, and American roots music. While Brock, Ulery, and Deitemyer have been playing together for over a decade in various ensembles and have recorded together extensively, Triptych marks their first collective endeavor. The music is an unorthodox combination of post-Romantic classical, Appalachian, and American jazz dialects fused with rhythms from West Africa, South America, and Eastern Europe.

“This is music of brisk intelligence and an almost off-putting abundance of composure… with frictionless access to great chunks of classical post-minimalism, atmospheric indie-rock and harmonically astute post-bop.” — New York Times 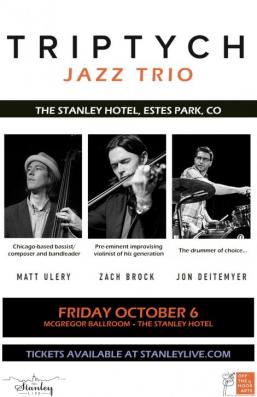