YESTERDAY/TODAY: A GAY MULTIVERSE ROMCOM ABOUT THE BEATLES

Robert is a writer. Or, well, he wants to be. He's only ever had one goodidea... but before he could write it, someone else did.

The concept: a sci-fi comedy about a parallel universe where The Beatlesdon't exist.

The thief: Richard Curtis (Love, Actually), with his 2019 film "Yesterday."

What Robert doesn't know is that he is in for a universe-hopping adventure ofhis own...

With a supernatural second chance to write the script that was "stolen" fromhim, will he make something of his trust-fund do-nothing life? Will hisboyfriend, Dev, be the same across the multiverse? Will saucy new flingsarise as the universe twists and turns the relationships in Robert's life?

This fast-paced farce pokes fun at pipedreams, procrastinations, and thephoniness inside us all.

Ages 14+ (Language and brief drug use) 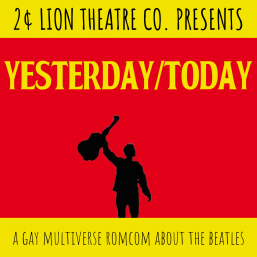