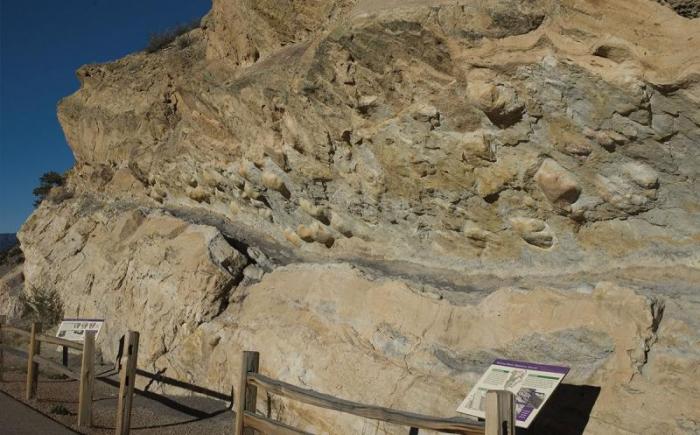 View prehistoric tracks, walk discovery trails, search for fossils (never disturb or remove fossils) or visit the Royal Gorge Regional History Museum to see an outstanding display of fossils, dinosaur bones, and a complete Stegosaurus replica skeleton displayed as it was found in the ground in 1992.

Garden Park Fossil Area, located just north of Cañon City on Red Canyon Road, is a 3,600-acre area that has been producing significant dinosaur fossils for nearly 125 years. Most of the Jurassic dinosaurs on display at Smithsonian’s Museum of Natural History are from this area. Three stegosaurus skeletons, including Colorado’s state fossil, were excavated here. 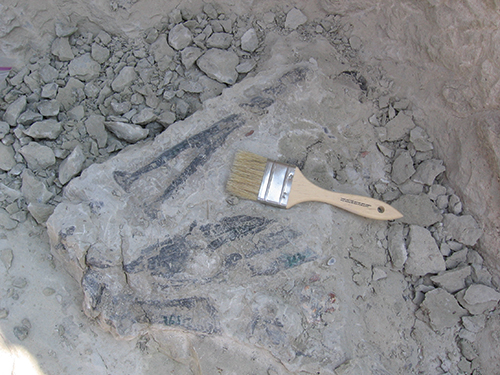 The privately owned Indian Springs Trace Fossil Site is also designated by the National Park Service as a National Natural Landmark. Located just east of Cañon City on the private Thorson Family Ranch, the National Park Service designated it as a National Natural Landmark due to the importance of the Ordovician Period (485 to 443 million years ago) trace fossils found there. These trace fossils include tracks left by trilobites, fish and other prehistoric creatures on the bottom of an ancient ocean. Indian Springs is considered the best locality to study Ordovician Period trace fossils in North America because of the excellent preservation and wide variety of ichnospecies, or types of trace fossils, found there.

In December of 1999 William Kurtz, a paleontology student at The University of Colorado, made a remarkable discovery. While walking along Skyline Drive west of Cañon City, he was amazed to see what he thought were dinosaur tracks.

With help from the city of Cañon City in closing Skyline Drive to work in secrecy, volunteers from the Garden Park Paleontology Society began to excavate the trackway site In February 2000. Volunteers worked with hammers, chisels, crowbars, picks, shovels and wheelbarrows to clear the tons of rock covering the tracks and other fossils.

Today visitors can view tracks that were made during the early Cretaceous Period, approximately 107 million years ago. Researchers have determined a group of dinosaurs were walking side by side through the mud along the edge of an estuary, probably eating the plants. The tracks were then filled in by sand and plant debris, which hardened to preserve them as casts of the actual tracks.