South Park boasts an array of nationally significant artifacts that reflect different aspects of this country's heritage.  The basin's high peaks, clear streams and copious wildlife embody the resources that sustained the native people and attracted settlers west.  Hundreds of historic sites and structures still remain 150 years after the development of early mining, railroading, and ranching at 10,000 feet.  Local events celebrate the lives of South Park pioneers.  Together these resources and traditions evoke images of the struggle for prosperity that played out within the ring of mountains that define Colorado's largest mountain park. 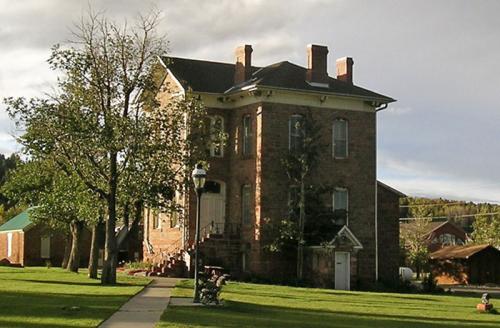 Seven years after Fairplay became the county seat in 1867, the old Park County Courthouse was built of native sandstone in the Italianate style.  Along with the adjacent stone jail, this building witnessed a parade of the famous, the notorious and the ordinary.  Known as the "hanging court," decisions made here had a profound impact on Colorado case law.  Listed on the National Register of Historic Places, it now serves as a public library and is one of 12 properties showcased in the Fairplay Historic Walking Tour brochure.

Managed by the U.S. Forest Service, the Boreas Pass Section House was build in 1882 to house railroad workers on the Denver, South Park & Pacific Railroad Highline Route between Como and Breckenridge.  Next to the Section House, the 1860's Wagon Cabin was built when this route was a mere wagon trail over the Continental Divide.  Listed on the National Register of Historic Places, these structures now serve as a visitor center and museum during summer, and a backcountry ski hut during winter.