Business in the Box Canyon 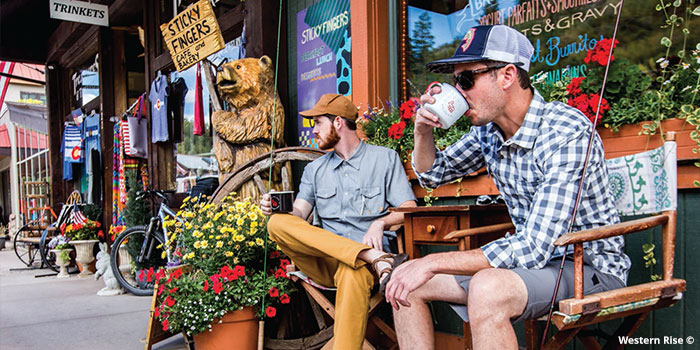 Kelly and Will Watters, the couple behind Telluride-based clothing company Western Rise, met in Vail in 2010, where each had moved to be close to mountains. There, the young couple lived lives familiar to many mountain town denizens, juggling outdoor pursuits like fly-fishing, mountain biking and climbing with the kinds of jobs, meetings and events that require some semblance of put-togetherness. And what that necessitated, Will says, “was two, sometimes three outfit changes a day.”

Will, who grew up in a textile family, and Kelly, whose own parents started a business together, decided to simplify the art of dressing in the mountains, and Western Rise was born.

The company uses high-performance fabrics and intelligent design to produce apparel as appropriate for mountain sports as it is for happy hour.

What this means, in short, is getting nerdy with textiles to maximize the movement capability of the clothing. Western Rise rigorously researches, tests and develops fabrics that look good, but also provide strength, stretch, warmth and wicking. We’re talking such esoterica as stretch flannel made by blending elasterell polyester with high-tech wicking fibers and fine-gauge wool yarns and Henley tops that feature Ultra Dry hydrophobic fabric.

This is next-level textile production, one that appears casual but actually entails thoughtout details and hard-working features. And in a time when casual clothing is more acceptable at the office and many professionals are outdoor minded, the demand is there. “People are really starting to prefer performance and comfort in their clothing,” Will says.

To launch the business, the couple moved back to Georgia, where Will’s father had a marine fabric company. There, Will worked in textile development for his dad while the couple got Western Rise up and running. They hired a designer, picked up shipments, warehoused inventory, fulfilled orders by hand and launched their website.

They initially planned to go the traditional route of wholesale, but switched gears, selling directly from their website and finding an overseas market as well as customers in cities like Portland and Denver. But they still felt they needed a boost.

“We realized that people wanted the product we were selling, we just didn’t know how to take it to the next level,” Will said. “Finding an accelerator program based in a mountain town was huge.”

The company was eight months old when it applied to the Telluride Venture Accelerator Program, a Telluride Foundation initiative that brings start-up businesses to town for five-month residencies to support their growth. Western Rise was accepted in 2016. The experience “was amazing,” the couple agrees, adding that the business is more streamlined, professional, organized and focused because of it.

When the residency wrapped up, they decided to stay. Today, Western Rise has an office in Telluride, a team of six and a global manufacturing and distribution network. Their business is still entirely online, where they utilize innovative crowd-funding to launch new products and stick to the philosophy of apparel elevated. “One because we are up here, second because we’re taking daily apparel and elevating it,” Will says. 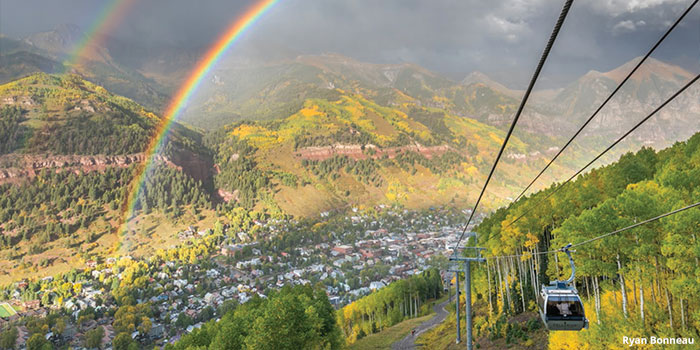 It can be difficult to get your bearings when you arrive in a new place. Sure, Yelp may make suggestions about where to eat and Google Maps may tell you how to get there, but the entire experience can fall a little, well … flat.

That’s the void a new app named Vizzit fills. You can think of Vizzit as a museum audio guide catapulted into the 21st century. As you move around a new city or town, it uses GPS coordinates to trigger audio, text and photo content. Users download the app, select the desired tour and proceed along the route, listening to stories about their chosen place, as they walk, bike, drive or, in the case of Telluride, take the Gondola.

In the Telluride region, there are two such Vizzit tours: one shares the highlights of Mountain Village while another tells you points of interest as you ride the Gondola. Some of the stories are historical, some are personal, some are entrepreneurial – all of them are memorable. There are several other Vizzit guides, including one for the San Francisco Bay Area and another for Niagara Falls.

Says Vizzit co-founder and CEO Arthur Bart-Williams, the inspiration for the app came while honeymooning in Maui in 2004. He was driving while his wife, Jess, was trying to navigate and read the guidebook at the same time. The experience left her frustrated: “I was missing all of the places we were driving by.”

Bart-Williams was inspired. He left the trip wondering how travel could be done better. Several business plans later, his vision became reality and Vizzit was born: a location-aware, mobile storytelling platform for regional publishers. He says, “I love that Vizzit helps users uncover stories around them that they would have missed otherwise.”