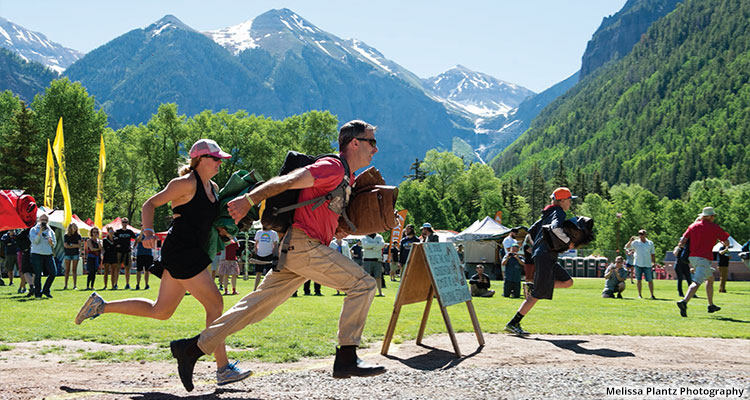 Camping out overnight. Waiting in an endless line with other hard-core hopefuls. Running so frantically that your top is ripped by an overzealous security guard. Staking a claim to prime pickings.

With nonstop dancing and tunes, late-night laughter and consecutive days of fun in the sun, you can sleep when the festival is done. As soon as the gates open in Town Park each morning during the Bluegrass, Ride and Blues and Brews festivals, it’s time to hit the grass running and take part in a favorite Telluride ritual of queuing overnight so you can join in the rush to place a tarp in just the right spot. Since choice real estate near the iconic Town Park stage is in high demand, it’s a serious business.

The night before, at the west entrance of Town Park, a line of chairs and people snakes alongside the San Miguel River. As it grows, the line swerves onto the sidewalk and winds around the Post Office. Festival staff dole out numbers to determine the order of entry. This usually happens between 3 and 7 a.m., so if you’re serious about getting good digs for your tarp, sleeping in line is your best bet.

Once the gates open, run like an Old West pioneer, staking your territory with a tarp or sun shade and building your homestead with coolers and chairs, friends and family. For one day, you own a temporary piece of Town Park and then it’s back in line to do it all again the next day. (Or steer clear of the whole thing, hike the Jud Wiebe and saunter into the festival around noon to poach the corner of festivarian friend’s tarp.)

Bluegrass, now in its 44th year, is the mother of the tarp run where the whole thing kicks off to the traditional dirge of a bagpipe. Serious tarp runners steer straight to the front, tossing their colored plastic canvasses with the finesse of a fisherman casting his net toward a school of mullet. Gung-ho dads haul heavy canopies to the sun-shade section to secure shelter for grandparents and wee festival first-timers.

Festivaling in Telluride is a multi-generational affair for many families, including mine. Our older daughter, Charlotte, completed her first tarp run when she was 7 and still camps out in the tarp line with her dad. At 10 days old, our son, Simon, celebrated his first festival at the 2012 Blues and Brews fest, ear plugs taped gently to his soft skin by the EMTs at the first aid tent. Little sister Cissely came next, too quick for a hospital delivery but just in time to join other bluegrass babies on the tarps.

No matter how you choose to attack the tarp run, it’s a time-honored tradition well worth the effort, and a great way to start a musical day in the mountains. 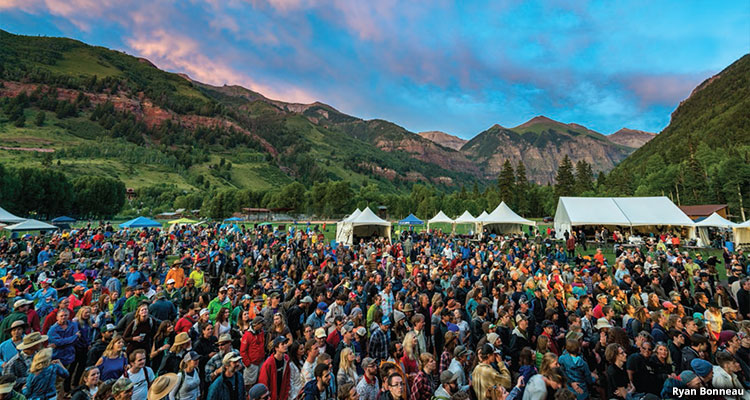 What We're Running For...

In this, its 44th year Bluegrass presents an astounding array of up-and-coming acts and returning royalty on the newly updated stage. The potential on-stage collaborations – a festival tradition – are mouth-watering.

Musical magpies are in for a treat at this year’s celebration of all things rock ‘n’ roll, when indie acts, emerging musicians and big names serve up an eclectic mix of alt rock, folk, blues and soul. A very special weekend.

With the astonishing vocal talents of two Grammy winners, as well as funk merchants, soul singers, jazz masters, and a spicy taste of the Big Easy, this venerable fest offers an exciting lineup that is innovative and authentic.

At the 2004 fest, B.B. King said he’d never seen a place more beautiful than Telluride. This year’s artists will give the exceptional scenery a run for its money with a steamy gumbo of rock, blues, funk and soul.