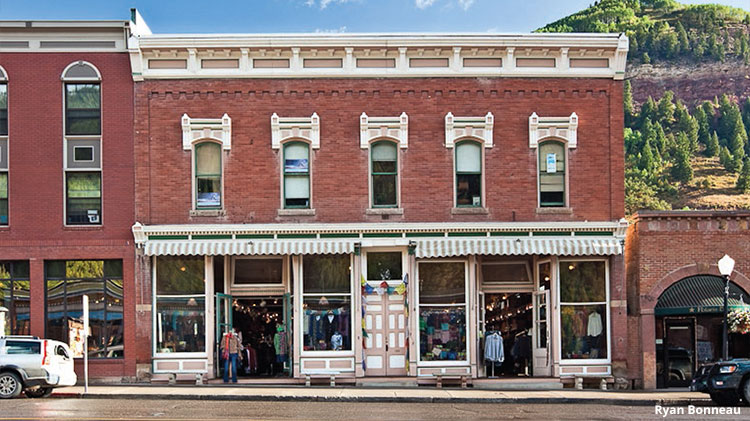 IN 1972, the streets of Telluride were unpaved, the population was paltry, the ski area was a fledgling enterprise and downtown could be downright sleepy. Not exactly an ideal scenario for a new business. But a young couple named Terry Tice and Susan Gulick figured that even cowboys and hippies needed a place to buy clothes. In July of that year, they opened a retail shop on the east 100 block of Colorado Avenue. They sold leather goods and denim from the diminutive storefront and lived in an apartment in the back.

And their hunch paid off. Their store gained the reputation as a cool and sensible place to shop, endured the initial lean years and subsequent tides of Telluride’s fickle economy and, today, Telluride Trappings & Toggery is a spacious and bustling institution in the heart of downtown with loyal customers of both local and out-of-town stripes.

In 2017, the Toggery, as it’s commonly called, marks its 45th birthday. It is the longest-running family-owned retail business in town as far as co-owners Todd Tice and Wendy Basham can tell.

Tice (who is Terry’s nephew) and Basham purchased the business from its original owners in 2004, and attribute much of its longevity to keeping to the vision Terry and Susan had all those years. Tice noted that when many people buy new businesses, the first thing they want to do is shake things up. That wasn’t at all the case when he and Basham purchased the Toggery in 2004, he says. “When we bought the business from Terry and Susan, we did not change one thing. We just kept to the heritage of the business. And we will stay with the business philosophy, while adapting to Telluride’s changing economy.”

That business philosophy entails listening to customers, being friendly, keeping consistent hours (9 a.m. to 9 p.m. most days), staying involved in the day-to-day operations and maintaining a welcoming store that offers something for everyone, regardless of age, style or wallet. “We’re always looking for affordable, unique, well-made brands,” Basham says.

Between its men’s, women’s and children’s sections, the Toggery offers everything from Free People dresses and Michael Stars tops to Frye and Sorrel boots, Smartwool socks, Lucky Jeans, oversized bags, stylish scarves and all manner of comfy sweaters and flannel menswear. Its apparel occupies the space between outdoorsy and upscale, between rugged and elegant, striking a mountain chic balance that – along with charming, unique items for the home that the Toggery also carries – resonates with customers. And with sale racks on its double front stoops, pressed tin ceilings and creaky wood floors, the store, which has expanded to 5,000 square feet since those early years, has the welcoming and worn-in feel of a long-established business. It helps that one of the two owners is usually on hand, unrolling the awning out front, chatting with customers or folding inventory.

Telluride has seen some changes since 1972. But the Toggery represents an institution that sticks stubbornly – comfortingly – to its origins: a retail store that is accessible, stylish and open to everyone. “Anybody can come in these doors and afford something,” Tice says. “That’s very important to us. It’s really important for us to be approachable to everyone.”