High-Country Hounds at Work and Play

Man's best friend holds a special place in Summit County. Our dogs go to work with us, to the bank, to the store. They have veto power over romantic partners. They walk with us down the aisle. We share our beds with them. We cannot envision adventure without them.

Meet some of our local canine personalities. Keep an eye out - you might even cross paths with them. 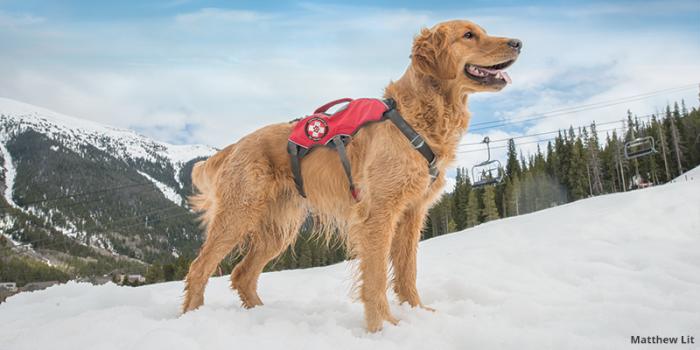 Heads turn as Mason, the golden retriever, walks around Copper Mountain or rides the chairlift in his red patrol harness with his owner and handler, Chris Gray.

“I have always wanted an avalanche dog,” admits Gray who tried, unsuccessfully, to make his family dog an avy dog when he was a kid.

Gray has been training Mason for avalanche rescue since he was a puppy. In the spring of 2016, at the wise age of two, Mason was certified (or, in avy dog speak, validated) with Colorado Rapid Avalanche Deployment (CRAD). Dogs like Mason are critical in avalanche rescues, where even a few minutes can mean the difference between life and death. These dogs are trained and able to locate victims buried under the snow faster than any human ever could.

On a typical winter day, Mason accompanies Gray, a snow and avalanche forecaster for Copper Mountain Ski Patrol, to work, where he trains with the patrol team and waits for a mission.

“We are a team,” Gray says. “It’s pretty rewarding to have your pet be your coworker.”

When he’s not patrolling, Gray works as an electrician. Mason takes summers off—for now, at least. Gray is a member of Summit County Search and Rescue and plans to add summertime search skills to Mason’s resume. 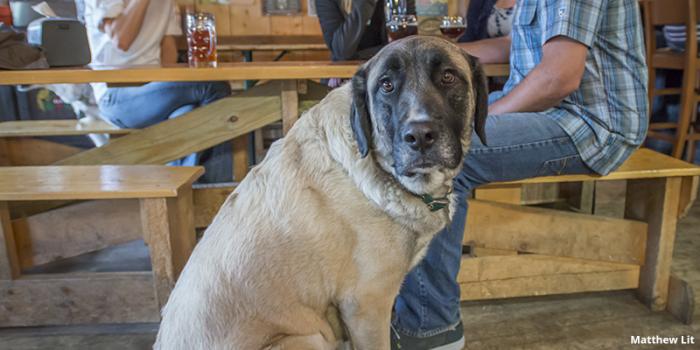 At 118 pounds, Ayla (pronounced eye-la) is hard to miss. Almost always at the side of her companion, Mark Luna, she has a presence that might make smaller dogs feel a little, well, inadequate. But she is by no means intimidating.

“She is a gentle giant,” says Luna, who names his dogs after the moon, a playful nod to his last name. (Ayla is Turkish for the halo of light around the moon.)

If Ayla has a fault, it is her inclination toward laziness. Of Turkish descent and known for their speed and agility, Anatolian shepherds are often used to guard livestock, but Ayla didn’t make the cut on the farm where she was expected to work. Luna, couldn’t believe his luck when he found Ayla through the rescue group, Big Dogs - Huge Paws.

“I take her everywhere I can and probably some places I shouldn’t,” he says, laughing. “I almost feel naked when she isn’t around.”

Most often, you’ll find the pair at Prosit or Rocky Mountain Coffee Roasters, two places they frequent so often that if they happen to walk by, Ayla will duck in alone. People of all ages approach Luna to pet Ayla. “She’s a unique dog,” he says. “She’s definitely a conversation starter.” 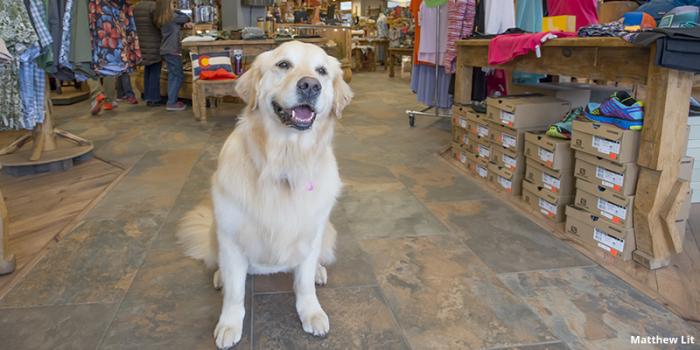 Christy and Campy Campton found Maizey through Golden Retriever Rescue of the Rockies (GRRR), but they will tell you Maizey rescued them.

The Frisco couple was recovering from the loss of their three golden retrievers; Pancho, Scout and Millie—two of whom passed within months of each other. The owners of Rivers Clothing Company, the Camptons were accustomed to having their dogs with them at the shop every day. The void one dog leaves behind can often seem insurmountable, but three?

It took nearly a year before the couple decided they were ready for another dog. They set out in search of a boy, but 11-month-old Maizey (then named Daisy) captured their hearts.

“She is so sweet,” Christy says. Maizey has picked up where Pancho left off; she lounges in the doorway at Rivers, greets customers and entertains kiddos while their parents shop. The golden nuzzler loves to raft and hike with her humans, but don’t ask her to hike in the desert.

The Camptons laugh as they recall trying to hike with Maizey outside Las Vegas last spring. Though the desert temps were barely nudging 80 degrees, the five-year-old golden decided it was too hot to hike and plopped down in the shade instead.

“She thought she was going to die,” says Campy. “She’s definitely a mountain dog.”

It all started with Flash—a handsome white, black and brown

Great Pyrenees/Bernese Mountain Dog mix that Karen Berg, original owner of Next Page Books & Nosh, brought to work with her every day. The giant furball gained quite a following on Frisco’s Main Street over the years, and eventually Berg adopted a second dog, a tiny terrier mix she named Dickens, who liked to jump on Flash as he relaxed on the bookstore floor.

Lisa Holenko, who worked with Berg at the time and has since purchased the bookstore with her husband, Doug Robinson, immediately fell in love with Dickens and adopted his sibling, Scout. Holenko, who admits she wasn’t a fan of dogs before working at Next Page, loves having the dogs at the store. “They make me laugh every day,” she says.

Customers adore them, too. Some stop in just to see the dogs. Flash has since passed, but Holenko and Robinson adopted a second terrier mix, Wally, who has joined the gang of bookstore pups—all of whom carry literary names.

Some might argue Summit County’s affinity for dogs verges on discrimination. “What about cats?” they ask. Cats certainly don’t get the attention their canine friends do—except one, maybe.

Mizu has made a name for himself in Frisco. The Bengal cat lives with Matti Wade, owner of Ten Mile Creek Kayaks, but he’s his own agent. He greets customers at the shop and works to keep the premises free of mice and voles. Sometimes he strolls down the street to visit friends at Summit Daily News and occasionally explores with the neighborhood fox.

Japanese for water, Mizu seems an apt name considering Wade’s profession, but for a cat? Mizu defies stereotypes. He likes to hang out on the rocky riverbank, watching as Wade kayaks in the playhole by the west end of Frisco’s Main Street. He’ll join Wade for a lake session on the standup paddleboard. (He can swim.)

“He walks on a leash,” says Wade. “He fetches. He comes when you call him. He acts more like a dog than a cat.”

Not ready for the commitment of a full-time pet? Volunteer at Summit County’s Animal Shelter. Walk the dogs. Cuddle the cats. Get your furry fix and maybe you’ll find your forever friend along the way. Summit County Animal Shelter, 58 Nancy’s Place, Frisco, 970-668-3230

It’s dog heaven for the pups at Frisco’s Canine 4K in August. Walk or jog this crazy fun run and don’t miss the hilarious mountain mutt contests at the finish line. summitlaps.com

Memorialize your dog with a family portrait or professional photo that captures his spirit and personality long after he’s gone. Photographer Matt Lit combines his love of dogs and local landscapes to create quality, personal art you’ll forever treasure. 970-390-6225, coloradodogphotography.com

Cleaning your pup is easier than ever with the self-serve, summer outdoor doggie wash at Frisco’s Laundromat. Soap? Check. Towels? Check. They even have an apron so you don’t get wet—all for $10. 406 Main St., Frisco, 970-668-3552