The months of June through October are a blast in Colorado for a number of reasons—long summer days full of blue skies and that Colorado sunshine, wildflowers and greenery (or goldery if we’re talking later in the season!) everywhere you look, and access to all your favorite warm-weather sports and activities—but there’s one symbol of a Colorado summer that we just can’t live without, and it’s Palisade Peaches. If you’ve got two eyes and have ever stepped more than ten feet out your front door, we’d be willing to bet you’ve seen the Palisade tents on the side of the road, or the ‘Colorado Proud’ signs in your grocery store’s produce section. 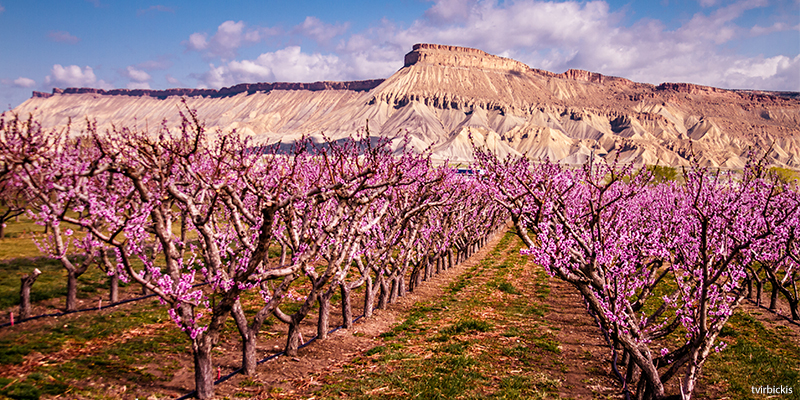 Colorado peaches are most famously grown in the town of Palisade, and they are known for being extra juicy and extra sweet, thanks to the long sunny days and cool summer nights in Colorado, which help all those delicious fruity sugars develop. Palisade peaches have a long history as a Colorado classic, and it all starts with a man named John Harlow. After the Ute tribe were forcibly removed from their ancestral home in the Western Slope in 1881, colonizers began developing a town known as Palisade. The farmers there quickly realized just how rich and nutrient-filled the soil was, but while it was great for vegetables and grains, there wasn’t nearly enough rainfall or water for fruit trees, which shriveled up and died very quickly. But John Harlow, who planted some of the area’s earliest peach trees with his wife in 1882, was a determined man. He spearheaded a canal project to divert water from the Colorado River and irrigate the region, and though it took years for his project to come to fruition (pun intended!), it worked. By the beginning of the 20th century, more than twenty-five thousand pounds of peaches were being shipped from Palisade to regions across the country each year.

Once they figured out irrigation, farmers began planting more fruits, like apples, pears, grapes, apricots, and cherries, cementing Palisade and the surrounding area as Colorado’s most famous and most productive agricultural hub. Today, Palisade is home to orchards, farms, and vineyards galore.

In the late 1800s, the Palisade community began holding an annual festival called ‘Peach Days,’ a celebration of the town’s most famous crop. Over the years, Peach Days, typically the second weekend in August, has continued and evolved into the Palisade Peach Festival. A yearly event full of music, activities, food, and of course, peaches!

Where to Find Palisade Peaches

During harvest season, you’ll find Palisade Peaches pretty much everywhere you look. Roadside stands, typically under tents with distinctive signs proclaiming PALISADE PEACHES, can be found everywhere from empty parking lots to beside gas stations to the side of a country road. You can also hit up your local farmer’s market, where you’ll most likely find at least one vendor hawking these delicious local fruits. And if all else fails, most Colorado grocery stores feature Palisade Peaches during the summer in their produce section, usually front and center so you’ll have no trouble finding them. 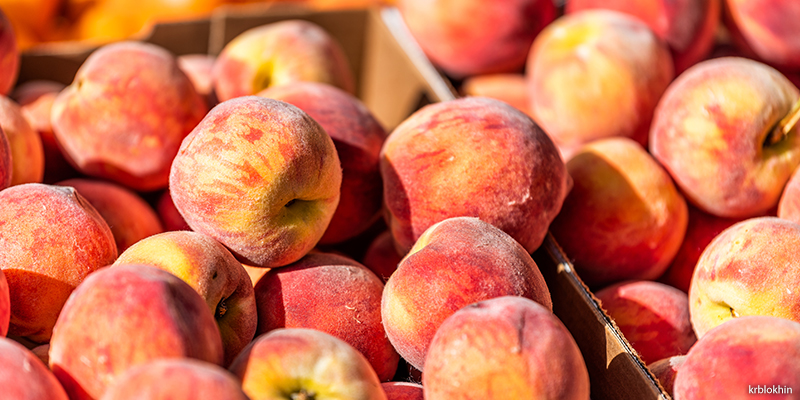 Peaches are ripest when they start to get a little soft—there should be some give to the flesh, but make sure you’re not squeezing too hard or you could bruise the fruit. A ripe peach is generally also very round, shouldn’t have any green tones left to its color, and might be giving off a faint, sweet aroma. If you find your peach isn’t quite ripe yet, that’s okay! Peaches will continue to ripen once you bring them home. Just place them on the counter away from direct sunlight, separated if you can, and resting on their shoulders as opposed to on their bottoms. They should ripen up beautifully within a couple of days. You can also slow the ripening process by keeping your peaches in the fridge.

In a perfect world, we’d all have the opportunity to visit a Palisade Peach farm, wander through the orchards, and pick our own peaches. Local orchards like Green Acres U-Pick, Fruit Basket Orchards, and Green Barn Fruit Co. usually offer U-Pick experiences for peaches, berries, apples, lavender, and veggies. That being said, even if you’re not taking fruit right off the tree, there’s more than one way to pick the perfect peach.

First of all, decide what you’re using your peaches for. If you’re looking to bite into a juicy peach as a snack, you’ll want to buy your peaches at a grocery store, or buy what are called “firsts” at a farmer’s market or fruit stand. Firsts are the best of the best—the ripest, prettiest, best-for-fresh-eating fruit the farmer has. They’re also the most expensive, so if you’re looking to use your peaches to make a cobbler, jam, or other products that don’t require the fruit to be completely intact, then you might want to consider asking the farmer or stand worker about “seconds” or even “thirds.”

Seconds and thirds are a fruit that doesn’t quite meet the standard—maybe it’s overripe, undersized, bruised, cracked, discolored, or just does look perfect. For whatever reason, it’s not ideal for eating fresh, but this doesn’t mean it’s useless. Seconds and thirds are often just as delicious for eating as firsts, and what’s more, they are usually great (and sometimes even better!) for baking, cooking, dehydrating, juicing, blending into smoothies, or even fermenting if peach wine is your thing. As a bonus, you can usually get them at a discounted price! A word to the wise, though—seconds and thirds usually end up getting scooped up in bulk pretty early in the day by those in the know, so if you’re looking to snag some from the farmer’s market or fruit stand, then set your alarm and get there early before they run out!