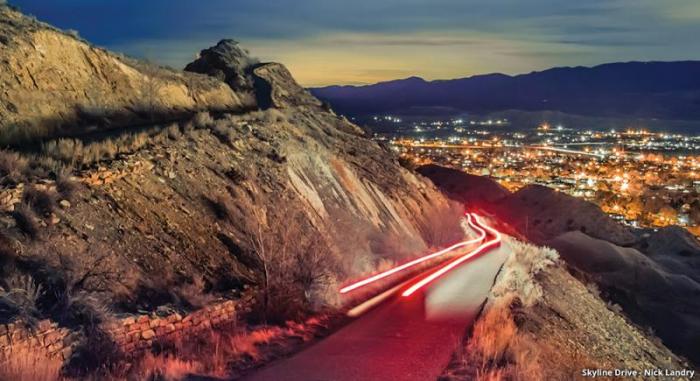 During the early 1900s, local leaders devised a plan to build a road over the sharp Hogback west of Cañon City. The unprecedented scenic thoroughfare would give visitors and residents dramatic Colorado views and allow them to practically touch the sky.

In 1905, around 60 inmates from the Colorado State Penitentiary were assigned to construct Skyline Drive. They finished in 1906 and the city council named designated vehicle days and horse-drawn carriage days to avoid conflicts along the narrow route. 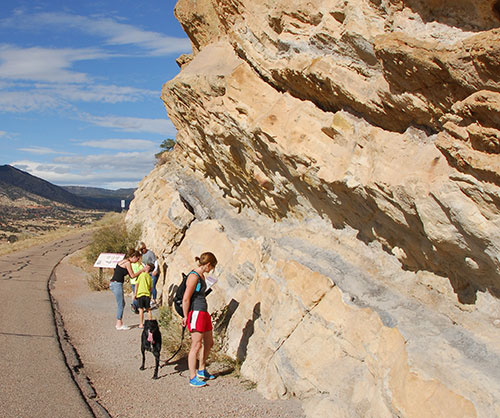 Deposited sand and mud flowing in from the ancestral Rocky Mountains about 105 million years ago formed what is now known as the Dakota Hogback formation. View layers of red rock along the base of the ridge dubbed the Fountain Formation by geologists, and see where dinosaur fossils were found in the Morrison Formation.

Skyline Drive, a 2.5 mile (4 km) paved drive, lies northwest of Cañon City. It travels along a narrow razorback ridge. The descent begins with a hairpin turn and winds down the eastern side of the hogback. Not for the timid driver, there are points where both sides of the roadway drop several hundred feet.

With stops, allow about one hour to explore Skyline Drive. The road is open daily during daylight hours and may close for inclement weather.

Directions: Head west of Cañon City on Highway 50 for two miles and turn right at the entrance to Skyline Drive under the big stone archway. Take note of vehicle length restrictions.

Sights Along the Way

Plenty of pullouts and parking areas make it easy to stop and enjoy the views overlooking Cañon City, Florence, Fremont Peak and the surrounding landscape. Stop to see the Gateway Arch, an entrance marker built by inmates in 1932 using a stone from all but 3 states in America.

Pull over near the top to view the interpretive panel and dinosaur footprint casts embedded in the cliff face. Local resident and paleontology student Bill Kurtz discovered the dinosaur trackway in 1999. Another great stop to pull over is at the Floral Avenue Trailhead on the eastern side of the hogbacks. Walk north along the Greenhorn Trail to view interpretive panels on the Western Interior Seaway that once covered the whole state of Colorado and see the evidence of an extinction event (Cenomanian –Turonian Extinction) that occurred 94 million years ago.