Get Bitten by the River Bug 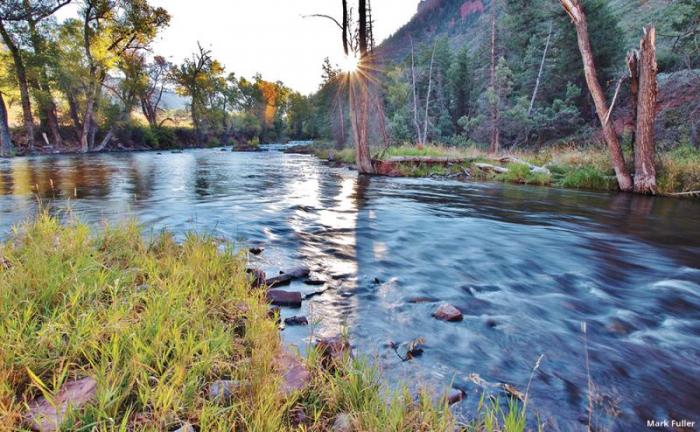 Anglers call it the green drake.

You can call it the bug that put Basalt on the fly-fishing map.

Officially, it’s Ephemera guttulata, a species of mayfly. It’s an aquatic insect whose presence is an indicator of a healthy freshwater habitat. In fly-fishing circles, the hatch of the green drake — when the immature nymphs molt to become a swarm of flying adults—is legendary for its ability to lure large, otherwise-fish-eating trout to the surface to feed on insects once a year.

Across much of the country, that once a year lasts just a few days in the spring before the watergets too warm. But here, on the Fryingpan River, drake hatches can happen all summer long.

“Summer has some of the best, world-famous hatches anywhere when it comes to green drakes,” says Scott Spooner, store manager of Basalt’s Taylor Creek Fly Shops.

“That’s what people come in to fish for,” says Warwick Mowbray, co-owner and official equipment tester of Basalt’s Frying Pan Anglers. “You can find drakes from the middle of July on the Fryingpan through to late September, even early October.”

The secret lies in Basalt’s location downstream from the Ruedi Reservoir dam. The water released from Ruedi comes from the bottom of the lake, making it extra chilly and keeping the water below the dam the ideal temperature for green drakes. It’s a large part of the reason that the Fryingpan River is one of the most famous trout fisheries in the U.S.

But the green drake only begins to tell the tale—much of it yet unwritten—of the town of Basalt and its relationship with its two amazing rivers. For as much as its past and present are about a bug, the future of Basalt’s gold-medal rivers is about so much more.

Go for the Gold

In order to qualify for Colorado Parks and Wildlife’s designation of “gold medal,” a lake or stretch of river must have public access and be able to produce at least 12 “quality” trout (14+ inches) per acre. The habitat must also support at least 60 pounds of “standing stock” per acre. Standing stock is the amount of living organisms— fish, aquatic plants and invertebrates — in the ecosystem.

In all of Colorado, there are only three lakes and 322 miles of 11 rivers that qualify as gold medal. Thirty-six of those miles — 14 on the Fryingpan River and 22 on the Roaring Fork River — are in our local watershed.

What that means is that in North America, there is only one town that sits at the confluence of two gold-medal rivers: Basalt, Colorado. It’s what Aspen and Glenwood Springs are talking about when they mention “great fishing” in their marketing efforts. They mean the fishing right here.

And it’s not just that the rivers are gold medal; they also offer different fishing experiences. The Pan, with its flow controlled by the dam, is a perfect river for wade fishing and finding consistent pools. The Fork, undammed and fluctuating based on runoff, is ideal for drift fishing in a boat or finding a little solitude.

“The Fryingpan is very accessible,” and thus can get crowded, says Mowbray. “Along the Fork, you can get to some magnificent places if you’re prepared to walk a mile or two along the paths. You can find stretches where there’s nobody.”

It’s that variety, which also includes Ruedi and countless mountain lakes and creeks, that keeps devoted fishermen and women coming back to town year after year. And if these repeat visitors are astute, they might notice a plethora of river-related changes aimed at attracting new visitors who may care nothing about fishing. 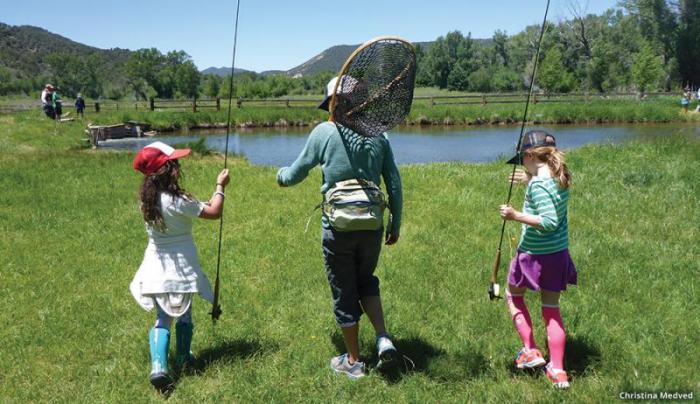 Banking on the River

To see the future of the Roaring Fork River in Basalt, start just east of downtown at Fisherman’s Park, with its newly renovated facilities and boat ramp, and walk west along Two Rivers Road.

First, although you may not notice it, you’ll come to the new whitewater park slated to open officially in midsummer 2017. It’s down and to your left, where Pitkin County shored up an unstable riverbank and created two whitewater features. But you can’t see it very well from the road. You’ll need to walk along the newly constructed boulder pathway that skirts the water and provides access to the park.

Originally conceived by Pitkin County attorney John Ely and commissioner Rachel Richards as a way to protect a county water right purchased in 2010, the project finally got under way in 2016. Water from the river was diverted through a channel so excavators and trucks could get in and do their thing, digging pools, moving boulders and installing the wave blocks.

With the work complete, the channel was filled in and replanted with willows, and all that can be seen of the changes to the river are two ideal waves that have local paddlers excited. Before, most rafting and kayaking happened on the upper or lower sections of the Roaring Fork. With its new park, Basalt hopes river users will start including the middle Fork as well.

“There are studies that have shown the economic benefits of these whitewater parks in places like Salida and Buena Vista,” says Quinn Donnelly, one of the engineers who led the project. “It provides another reason for people to come to town.”

And while, clearly, fishing is Basalt’s main draw to its rivers, there are so many other ways to take advantage of recreation on these waters.

“Most of the people I talk to, rafting is on their list when they come to Colorado,” says Jim Ingram, owner of local rafting company Aspen Whitewater. “People just love being on the river.” 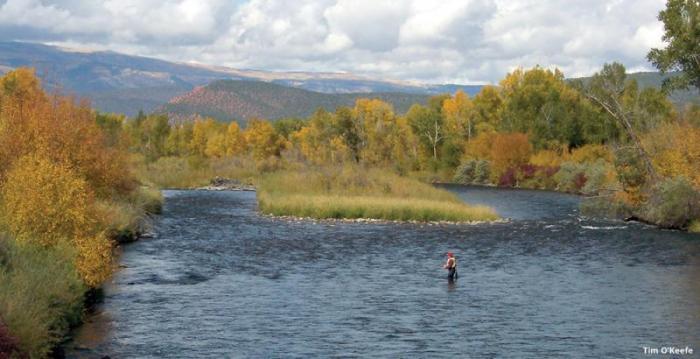 A Proud Plethora of Parks

Farther along Two Rivers Road, just past the Midland Avenue Bridge, in the heart of downtown Basalt, sits the riverside parcel that has sparked much debate over the future course of town. It’s called the Pan & Fork after the mobile home park that was once there, and it remains very much a work in progress.

One thing is known for sure: Basalt, which owns the acreage along the river, will be getting a new river park, but what kind of park and how large it will be still depend on what the town and private developers decide. In the meantime, just across the river, there’s the wonderful Midland Park, with its boardwalks through the wetlands, skate park and unique stick-sculpture house.

You see, that’s what a lot of people don’t understand about Basalt: Regardless of what happens on the Pan & Fork parcel, the town already has an amazing collection of river parks.

In addition to Midland Park, there’s Confluence Park, commonly known as “the beach,” which sits at the junction of the Fryingpan and Roaring Fork; Ponderosa Park, by the roundabout, which boasts a food garden, river trail and musical play area; and, adjacent to the Pan & Fork, Old Pond Park, with its picnic areas and children’s fishing pond.

It’s here, in this largest of the town’s river parks, that Basalt’s future is really taking shape. Sitting alongside the park is the new, eco-friendly headquarters of Rocky Mountain Institute, a prestigious environmental think tank. On the adjacent lot, scheduled to break ground this summer, will be the new headquarters of the Roaring Fork Conservancy, the organization tasked with ensuring the Pan, the Fork and all the other rivers and creeks in this watershed stay pristine.

“Our mission is inspiring people to explore, value and protect the Roaring Fork watershed,” says RFC Executive Director Rick Lofaro. “When people start to explore something, then hopefully they fall in love with it and place a higher value on it and protect it.”

Lofaro hopes that the new river center, with its highly visible location, will inspire people to delve deeper into the waterways that make Basalt what it is. The facility will be open to the public and will feature an improved lab for testing water quality and multi-use classrooms spilling out to the pond and wetlands.

In teaching people about the rivers, Lofaro hopes folks will come to see how valuable the rivers are.

“The rivers mean everything to Basalt,” says Lofaro. “They fuel the spirit and economy of town.”

That’s why it’s so important to ensure the rivers stay healthy and conditions stay just right for green drakes to hatch all summer long. Because at the end of the day, rafting, parks and conservation aside, Lofaro knows where Basalt’s bread is really buttered.

“It’s a great fishing town,” he says, “with a world-class fishery that people come from everywhere to fish: the Fryingpan River. It’s a big deal if you’re in that world.”

TODD HARTLEY is a freelance writer and award-winning humor columnist who lives in Basalt with his wife, son and two water-loving dogs, which makes him as excited as anyone to see what’s ultimately going to happen with Basalt’s rivers.

Stay: The Cabin at Ruedi Shores is a diamond in the rough with space for everyone.

Do: In the morning, get breakfast at Whole Foods Market and then, if your youngsters are old enough and conditions allow, float the upper Roaring Fork River with Aspen Whitewater Rafting or Elk Mountain Expeditions. If your gang isn’t ready to shoot the rapids, grab some rods and fish for monster trout in the kids-only pond at Old Pond Park.

Eat: Grab sandwiches or slices for lunch at Timbo’s Pizza and head to Midland Park to eat while the kids hit the skate park or explore the wetlands. For dinner, go to Sure Thing Burger for burgers and beer, and if you have any room left in your stomach, go next door to Mauka for a frozen yogurt dessert.

Do: Test out your new trail runners you bought earlier at Bristlecone Mountain Sports and walk off the calories with a romantic afternoon stroll along the extensive, off-leash river trail network at nearby Crown Mountain Park. Afterwards, head back to downtown Basalt to appreciate the fine art at Ann Korologos Gallery and Toklat Gallery.

Eat: For lunch, dine on the patio at Smoke Modern BBQ, and sneak Fido some brisket scraps. Finish up with an exquisite meal and Spanish wine at Tempranillo, where you can dine al fresco with Fido leashed up.

Stay: Basalt Mountain Inn in the heart of downtown.

Do: In the morning, get to Two Rivers Café early for breakfast. Then take a couple of stand-up paddleboards and enjoy the scenic drive up the Fryingpan River. Inflatable, durable SUPs are available for purchase at Bristlecone Mountain Sports in Willits. They’re easy to transport and take home with you for future use. But if you’re not ready to commit, try renting from Shaboomee.com (they’ll meet you in the Whole Foods parking lot). Paddle away the morning exploring Ruedi Reservoir. Shop the boutiques and shops of historic downtown before a twilight float-fishing trip on the Roaring Fork River with Taylor Creek Fly Shops.

Eat: Come back to town for a late lunch on the deck at Riverside Grill. After fishing, head to Heather’s Savory Pies & Tapas Bar for pot pies, live entertainment and drinks before the half-block walk back to the inn.