Avalanche Safety 101: What You Need to Know

Every winter, an average of six people are killed in Colorado due to an avalanche. This season—which is a big snow year —there has already been an above-average number of avalanche deaths; see the stats here.

What Causes an Avalanche?

Four main factors that cause avalanches: a steep slope, snow, a weak layer somewhere in the snowpack, and a catalyst. When a catalyst—which can be as little as a gust of wind or skiing across an unstable patch—triggers the collapse of that weak layer of snow, it and all the snow on top of it becomes dislodged and starts to slide down the slope.

Avalanches generally occur above 8,000 feet, most often on steep mountain slopes with a grade of at least 35 degrees, though smaller avalanches still occur outside of these conditions.

There are two primary types of avalanches: sluff and slab.

Slab avalanches are the more dangerous of the two because as the giant layer of snow breaks, it picks up speed, sometimes reaching velocities of up to 200 mph. A snowslide traveling at high speeds with literal tons of mass can take anything along with it—including trees, boulders, structures, and certainly a person—dragging them along and mixing them in with trees and rocks before burying them deep in heavy, suffocating snow. 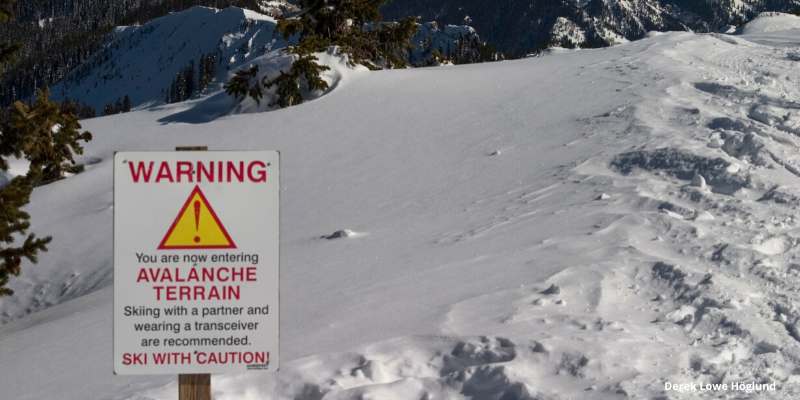 The best way to survive an avalanche is not to get caught in one in the first place. Luckily, there are precautions you can take before you head out into the backcountry during avalanche season. Always respect avalanche warning signs wherever they are posted.

Always use your eyes and ears, and trust your senses. If you hear the "whumpf" of snow or see dramatic drift patterns or fault lines, find another route. The sad fact is, 90% of people who die in avalanches were the ones who triggered the slide to begin with.

You should never neglect to look at an avalanche forecast or advisory before heading out into the wild. Avalanche forecasts can tell you where recent avalanches have occurred, where they are likely to occur, and the likelihood of them occurring soon based on snowpack and recent weather conditions. Before your adventure, check the Colorado Avalanche Information Center or with a ranger station, and plan accordingly. Never take a risk with an area that has been identified as a high risk for avalanche conditions.

Another major component of being prepared is the gear you carry. Avalanche safety packs can spell the difference between life and death, both for you and the other party members. A rescue beacon, also known as an avalanche transceiver, can be used to locate you or another person buried in the aftermath of a slide, saving precious time in the rescue process. A snow probe, a long, collapsible pole, is essential when locating someone trapped under the snow, and a lightweight, collapsible shovel is mandatory for effectively digging out buried victims.

Other important aspects of an avalanche kit might include an airbag, which is a deployable pack that blows up like an airbag in a car. An airbag helps you maintain flotation while in an avalanche and reduces the chance of being buried in snow. But if you are buried in snow, another piece of gear known as an Avalung might save your life. There’s plenty of oxygen in snowpack, but the problem is getting to it, especially when your little pocket of snow starts to fill with the carbon dioxide you’re breathing out. An Avalung helps you pull oxygen directly from the snowpack around you, and it can buy you extra time while rescuers search for you in the snow. In fact, an Avalung saved the life of a snowboarder trapped under the snow in an East Vail avalanche. 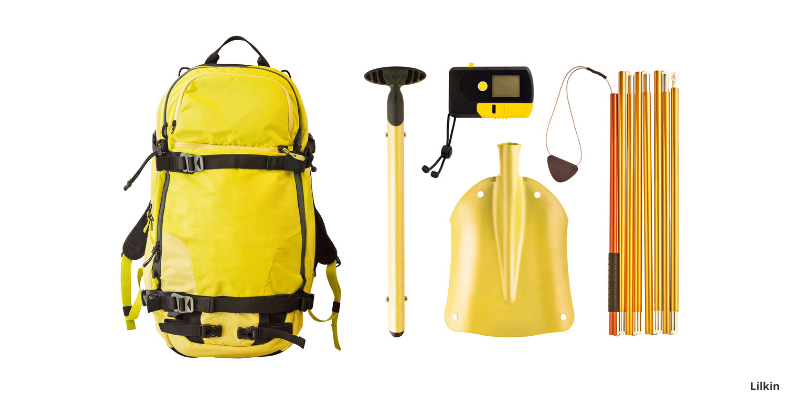 What to Do if You’re Caught in an Avalanche

First and foremost, get off the slab. If you’re on skis, a snowboard, or a vehicle like a snowmobile, head downhill and veer off as fast as you can, away from the slide path. If you’re on foot or get caught in the avalanche path, activate your airbag, grab hold of a tree if you can, or try to swim your way out. In general, thrashing around as much as you can will keep you closer to the surface, and also increase the likelihood that part of you—a boot, a hand, anything—might be visible to rescuers in the snow once it settles. Humans are far denser than the snow and debris of an avalanche, which means you’ll sink very quickly, and once the snow stops moving, it settles like concrete, making your ability to move nearly impossible. If you start to go under and sink, try and keep a hand as close to your face as possible so you have the ability to make an air pocket. Your time and oxygen will be limited, so clearing that pocket of space in front of you is your first priority, using your hands or headbutting the space, and only then should you start punching your fist skyward. It’s difficult to determine which way is up, so use a spit test. Spit into the space you’ve created and see or feel which way it falls, then start digging in the opposite direction. It’s possible you may be able to dig yourself. Your rescue beacon should already be transmitting, so do your best to stay calm until help arrives.

How to Rescue Someone Buried in an Avalanche

If a member of your party is buried in an avalanche, you should absolutely call for help immediately, but know that you—not a search and rescue team—may be their best chance of survival. Because you should both be wearing beacons, you can set yours to “receive” and turn off all other electronic devices to eliminate any interference in the signal. Take note of the last place you saw the victim. Once the snow settles, time is of the essence, but you will still want to proceed with extreme caution so you don’t trigger another snowslide or get yourself stuck in the snow. Search in a methodical sweep across the slide path, each sweep no more than 40 meters apart so your receivers have the best chance of picking up a signal, and keep an eye out for clues like gloves or gear.

When you pick up the beacon signal from the victim, keep your beacon close to the snow and try and pinpoint their location by approaching the spot from all sides. When you find the spot, use your snow probe to find the exact place where the victim is buried so you don’t waste energy digging in the wrong spot. Poke it into the snow in a spiral shape, with each strike about 10 inches from the last, until you make contact with the buried victim. Leave the probe in place and start digging, making sure to take turns among your party so no one gets too fatigued.

Your biggest concern as a rescuer is getting to the victim as quickly as humanly possible, before they asphyxiate. But when you find them, they may also have suffered trauma and injury, so it’s a good idea to know CPR or basic First Aid. 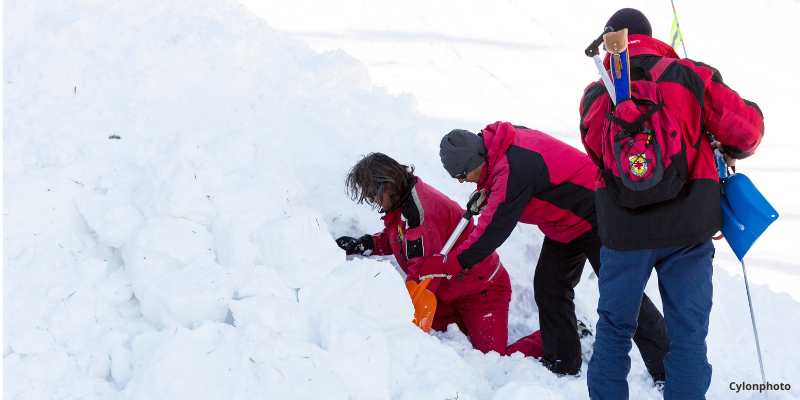 Under no circumstances should this blog post take the place of an actual, accredited avalanche safety course. If you’re planning on doing any backcountry skiing, snowboarding, snowshoeing, snowmobiling, or other backcountry activities this winter, it’s a good idea to take a class in avalanche safety. Learning the best backcountry etiquette, the skills needed to use your safety equipment, and how to dig a snow pit is essential. Even experienced winter athletes are recommended to take a refresher course every year or two to keep their skills and knowledge sharp. Most avalanche classes are very low cost, and many are entirely free. Check with your area's local park rangers, sporting goods store, resort, or outdoor adventure company for resources on avalanche safety and preparedness courses. With the proper safety precautions and knowledge in your tool kit, you’ll be ready to conquer the backcountry for a safe and exhilarating adventure.