Birdwatching is a fascinating hobby, and right now’s the perfect time to get into it, because depending on where you live, it can be done from the comfort of your own home! The Colorado Birds Records Committee recognizes over five hundred distinct species of birds in the state of Colorado (507, to be exact). Not all of them live in Colorado year-round, but spring is a great time to see a lot of unique species while they migrate back north for the summer. So, get yourself a pair of binoculars, and whether you’re enjoying a peaceful (and socially distant!) hike in the mountains or a relaxing day in your own backyard, keep an eye out for some of these beautiful birds in Colorado. 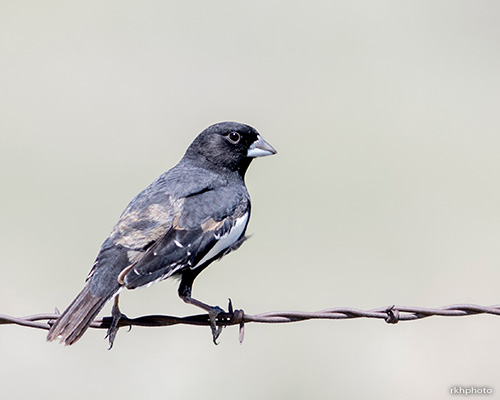 This cute little black and white fellow is the lark bunting—the state bird of Colorado. You can identify it by its jet-black body and distinctive white patches along it's wings. Females, and males as well during the non-breeding season, are brownish grey in color, and a bit harder to identify by sight, but the warbling trills of their distinctive song make them instantly recognizable. Lark buntings are the only member of the sparrow family whose males change color in the winter, though they usually migrate south during those months. They are most commonly found in the Plains regions of Colorado. 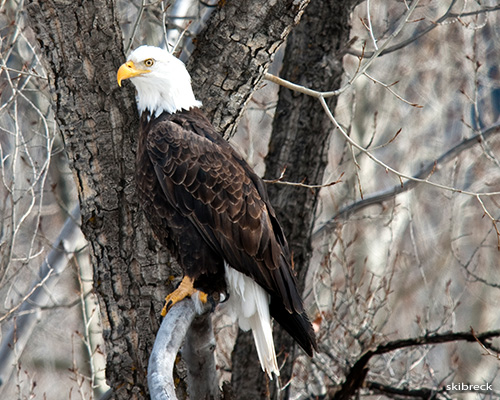 This gorgeous bird of prey needs no introduction; it’s the national bird of the United States of America, and its regal white head and yellow beak can be found on everything from our country’s official seals to bumper stickers and t-shirts. After a long and concerted conservation effort, the bald eagle’s population is on the rise and it is no longer considered an endangered species. The eagles can be spotted throughout Colorado, especially in the winter season when many of them make a stop in the Centennial State on their way north, though some do live in Colorado year-round. If you’re on the lookout for a bald eagle, keep on eye on areas near reservoirs, where the birds often perch on high trees or can be spotted fishing in the water.

Bright orange in color, these little guys are sometimes called the feistiest breed of hummingbird, because of their 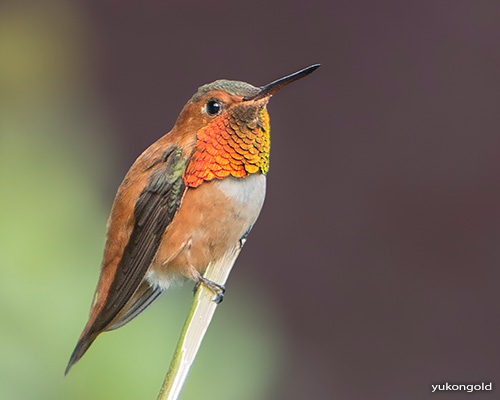 tendency to aggressively fight off other hummingbirds from feeders and flowers. Rufous hummingbirds migrate through Colorado, usually in late summer or fall when they are on their way back to Mexico for the winter season. They’re not the only hummingbird in Colorado—broad-tailed hummingbirds, with their red throats and green feathers, can be seen at higher elevations and in the sub-alpine meadows of the western half of the state, and Calliope hummingbirds, which have vibrant magenta throat feathers and iridescent green bodies, are also common. If you’re looking to attract hummingbirds to your backyard feeder, there are two times of year to do it—the first is in the spring, when the hummingbirds are migrating north, and the second is in the fall, when they migrate back south. 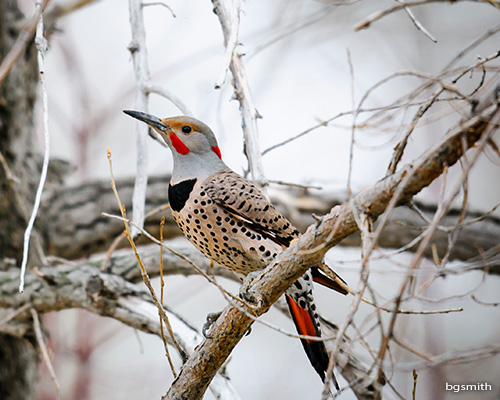 Northern flickers are spotted across their bodies, with vibrant yellow tones in their tails and wings, and dusty orange heads with a distinctive bright red spot. Northern flickers can be found in many parts of Colorado, and at all elevations up to the timberline. They’re part of the woodpecker family, but they prefer to peck at the ground for insects rather than trees. 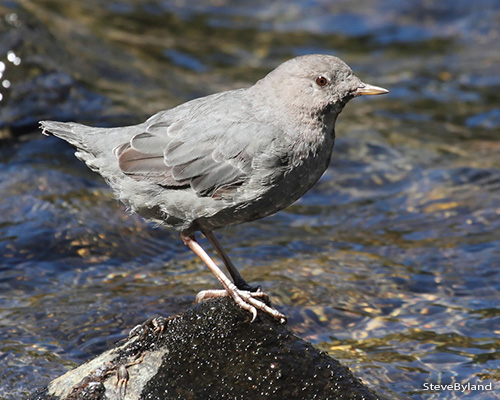 Dippers aren’t the most distinctive birds by appearance, but they are actually really unique in that they’re the only aquatic songbirds in North America. You might find an American Dipper hunting for insects in the shallow rivers and stony creeks of the Rocky Mountains, or hear it’s clear, ringing “zeet” call while out on a peaceful hike. 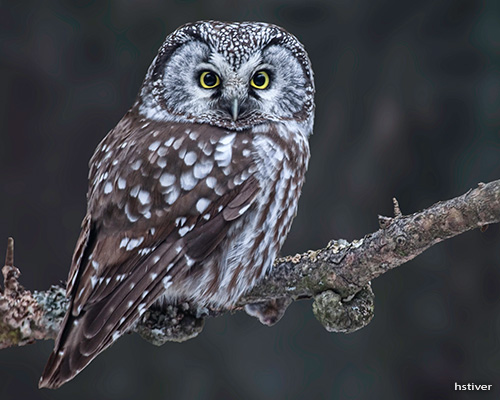 Boreal Owls are usually found much further north than Colorado, and in fact, the Centennial State is the furthest southernmost region of their natural range. Boreal owls are small with bright yellow eyes, and in Colorado, you’ll find them in high alpine areas where it stays cold for much of the year. Boreal owls are pretty hard to spot, so you’ll have to be patient and methodical—and probably a pretty experienced hiker up for a challenge—to lay eyes on one of these shy birds. 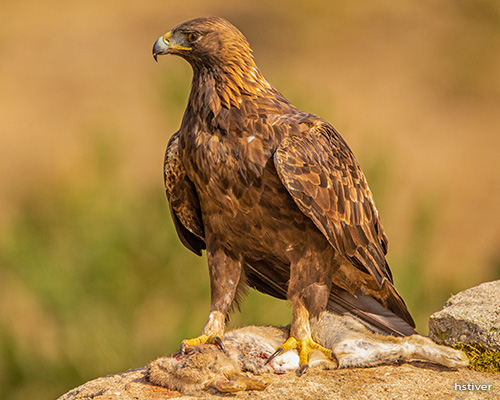 These majestic raptors are another common symbol of Colorado, with dark brown feathers and golden heads and

necks that give them their name. Juvenile goldeneagles have white patches on their wings. They’re pretty common in the Western US, and while many of them call Colorado home year-round, plenty of others migrate to the Centennial State during the winter months. Golden eagles are more solitary than Bald eagles, and they live in the plains, mountains, and both open and rugged terrain. 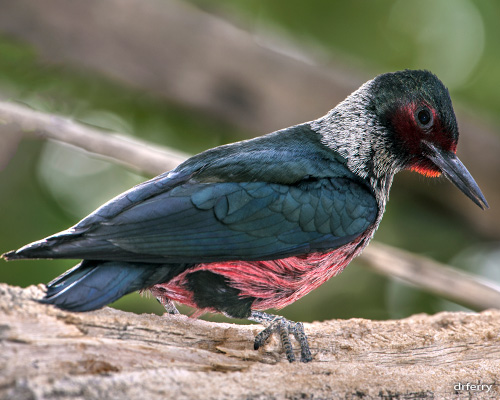 With a red face and pinkish abdomen, and a dark green body with a silver collar, Lewis’ Woodpecker is a flashy bird and easily recognizeable. Named for the famous explorer, Meriwether Lewis, this woodpecker can often be found in tall pine groves throughout the mountains, as well as the staglike remnants of forest fires. Despite the name woodpecker, Lewis’ woodpecker doesn’t actually peck at tree trunks for food—it hunts by catching insects in midair. Outside of breeding season, Lewis’ woodpecker can be found foraging for nuts. 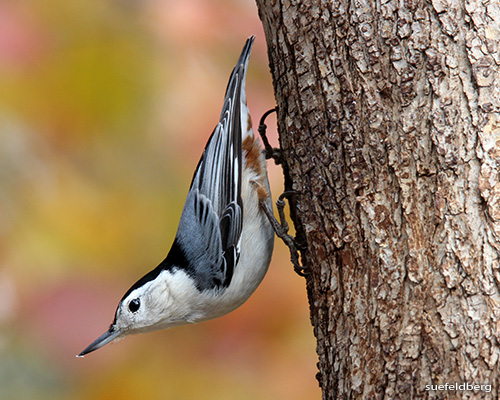 Named for their tendency to jam nuts into cracks in tree bark and hammer at them with their beaks to ‘hatch’ them open, there are three different varieties of nuthatches found throughout Colorado: the pygmy nuthatches of the mountain ponderosa forests, the intra-state migratory red-breasted nuthatches, which head to the northern parts of Colorado in the summer, and the southern regions of Colorado in the winter, and the white-breasted nuthatch, which nests in trees and has the unusual habit of cleaning up after itself every day by removing any wayward droppings each morning when it wakes up. Nuthatches like trees, so if you live where there are plenty of trees, chances are, you’ll spot a nuthatch.

Notes for Attracting Birds to Your Backyard

You won’t be able to find all of these birds in your own backyard—seriously, attracting eagles and owls to your birdfeeder is going to be a lot more trouble than it’s worth—but when it comes to songbirds, hummingbirds, and backyard birds, a birdfeeder will go a long way. Get a feel for the types of birds in your area, and find out what they like. For example, chickadees and finches go nuts over sunflower seeds, while millet is great for sparrows and mourning doves, and blue jays prefer peanuts. (I know, they can be such picky eaters!) If hummingbirds are what you’re after, make sure to have a proper hummingbird feeder in a nice shady spot (and use a sugar solution that contains no red dye), and keep it regularly filled for them.

Another great way to attract birds to your yard is to set up a birdbath or water feature. Lots of birds, like hummingbirds for example, love to bathe and play in the water, and if you give them a safe place to do so, they’ll reward you with a frequent show as they clean their feathers and take a nice, refreshing drink. Just remember to clean it and refill it frequently to stop algae from growing or insects from breeding.

One extremely important note to remember is that if you have a cat, you should think twice about inviting birds to your yard. Domesticated cats are one of the most dangerous human-caused threats to birds, and have been recognized as being partially responsible for the extinction and endangerment of dozens of species. Keep your cat indoors if you can, and if you do have an outdoor cat, then save your birdwatching for hiking and camping trips instead of luring them to your backyard where they may meet an untimely demise.

However you choose to do it—in your home or out on the trail—keep an eye out for the birds above and many others. Before long, you’ll be able to recognize them by sight and sound, and you’ll feel that much closer to the amazing wildlife we have here in Colorado.