Hike Like a Local: Your Guide to Colorado Trail Etiquette

The sun is shining, the wildflowers are blooming, and the trails are… yeah, they’re packed. Hiking in Colorado feels like it’s getting more popular by the year, so that means it’s more important than ever to be a responsible trail user. By adhering to proper Colorado trail etiquette, you’ll help make sharing the trails with other hikers, bikers, horseback riders, and more easier than ever, and hopefully everyone else will return the favor for you.

First up, let’s talk right of way. When you’re on the trail and someone’s approaching, who pulls over to let the other pass? Well, that depends on a few things.

If you come across another hiker on the trail, the hiker who is traveling uphill gets the right of way. Of course, sometimes the uphill hiker needs a break, and they’ll pull over to let you pass so they can take a breather, but that’s their call, not yours. When you’re in the zone heading up that incline, you want to take advantage of that momentum, so pay it forward by letting uphill hikers call the shots.

Now, let’s imagine you’re hiking or trail running faster than the person or group in front of you, and you want to pass them. Pass like you would on the road—by coming up on their left side—and alerting the hiker in front of you to your presence with a quick “Hello” or “On your left.” When the trail is narrow, don’t pass. Wait until it opens up a bit wider so you don’t end up stepping off trail and risking erosion or damage to wildlife. 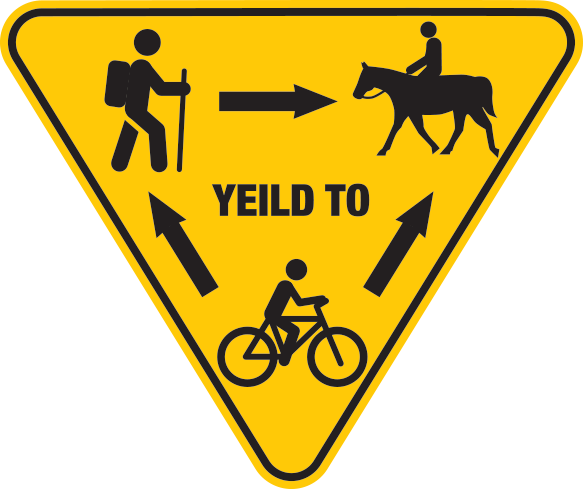 The hierarchy of passage on a hiking trail goes like this:

No matter what you’re doing on a trail, if you see a horseback rider, they get the right of way. Horses are bigger, less easily maneuverable in a tight space, and the most unpredictable of the three groups, so make sure you’re somewhere both rider and animal can clearly see you, and that you stay calm and don’t make sudden movements that could spook the animal as they pass. If you can, stand on the downhill side of the trail, as prey animals like horses aren’t fond of being towered over by a potential threat.

Bikers, on the other hand, are considered the most maneuverable on a trail. It is the biker’s responsibility to give horses and hikers the right of way, but let’s be real. When you’re a hiker, sometimes it can be easier to just let the bike pass. They’re moving faster after all, and just like the uphill rule, sometimes it’s nice to let them keep their momentum when they are huffing and puffing up a steep incline. Bikers, if you’re reading this, always alert hikers to your presence by calling out to them before you reach them, but hikers, keep an ear out just in case. 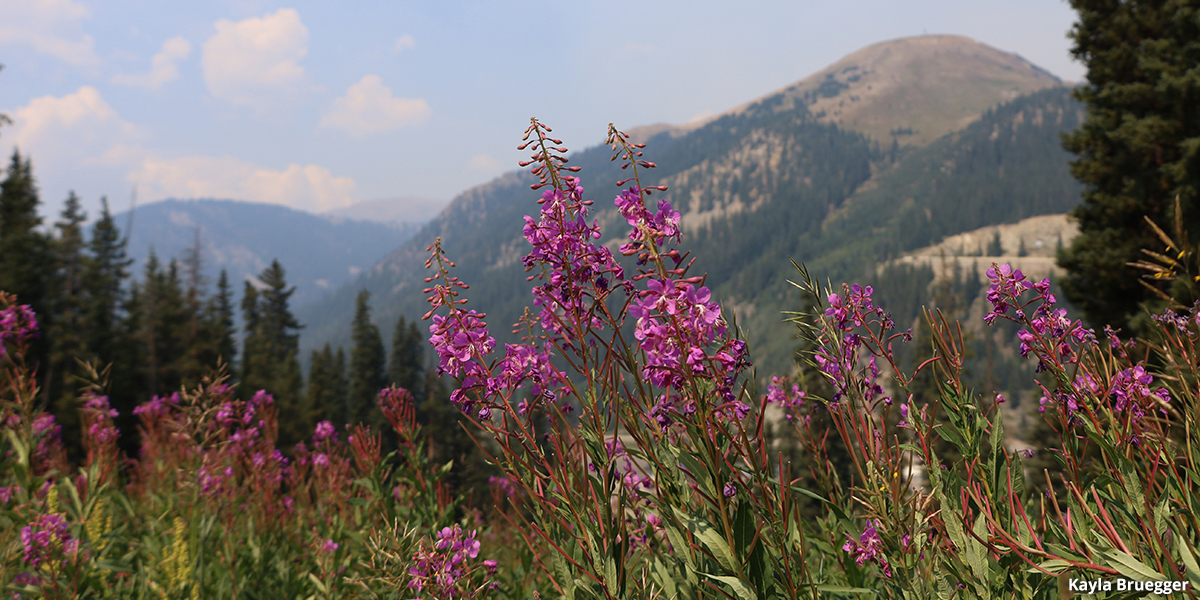 Don’t Pick Wildflowers - Leave them for others to enjoy. By picking wildflowers, you’re disturbing the ecosystem and not allowing those flowers to multiply for next year. Instead try one of our recommended wildflower hikes for a full wildflower visual.

Don’t Litter - This one feels like it should be obvious. If you brought a snack and it has a wrapper, keep it in your pocket or backpack and throw it out in a trash can or bring it back home with you. Remember, pack in, pack out, and leave no trace!

Do Stay On Trail - Especially when you’re dealing with switchbacks or heavily trafficked trails, it can be tempting to forge your own shortcut, but by doing so, you’re actually damaging the trail. Your footsteps could be destroying plant life, creating a new path for water to erode the mountainside, or disturbing animal habitats, like the resting places of rattlesnakes, for example.

Don’t Blast Your Music - Come on. Don’t be that person. When you’re out in nature, make a point to be out in nature. If you want to listen to music, use headphones, but don’t play music on your phone or speakers at a volume that’s going to negatively affect someone else’s hiking, biking, camping, or trail experience.

Do Be Aware of Your Group - Hiking in groups, whether you’re with friends or small children, means you’ve got a lot of heads to keep track of. Make sure you’re hiking single file (or moving into single file formation when passing other hikers) and staying aware of other people using the trail. Avoid yelling or carrying on loud conversations so you don’t disturb wildlife and let other hikers enjoy the serenity of nature, and be aware of your hiking companions’ pace. If you’re a speedy hiker and you stop to take a break, don’t get going again as soon as the group catches up—give them a chance to rest, too! You may need to slow down or speed up as a group to find a median speed that’s comfortable for everyone, but don’t push any group members too far, especially if they’re not used to the altitude. If your group is large and you split into several smaller groups, designate someone to act as a “sweep,” who hikes at the back of the group and ensures no one gets left behind.

Don’t Build or Destroy Cairns - Those cool towers of rocks on the trail? They have a purpose, and it’s to serve as a trail marker for users who might otherwise get lost. Sure they can be fun to build, but leave them to the pros, so you don’t risk sending someone off-trail.

Do Show Kindness to Your Fellow Trail-Users - Say hi! Smile! Share the trail! We know, it can be frustrating when your relaxing day in nature is spent surrounded by everyone else who thought to get the same break from the outside world, but we can make it better by being kind to each other. Similarly, if you see someone struggling on the trail, don’t be a jerk. We were all beginners at one point. 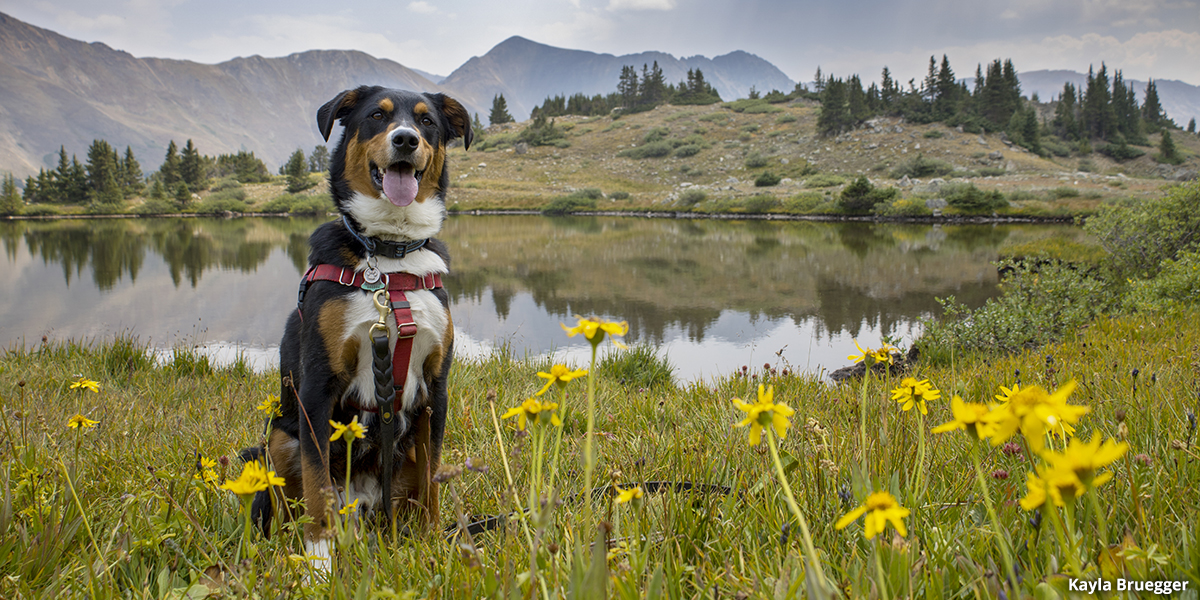 First and foremost, check to be sure pets are allowed where you’ll be hiking. Whether you’re hiking with your pooch or your pack llama, different parks and wilderness areas will have different restrictions, and some might require a permit.

Second, keep your dogs on leash, folks. It can be so tempting, especially in less populated areas, to let them run free, but having a dog off-leash means you risk them chasing after wildlife or even other hikers. Sure, your golden retriever might be the most lovable doggo out there, but you’re the only one who knows that. To the hiker approaching from around the bend who was once bit by a dog, they could seem like a nightmare on four legs, and to the horseback rider training their young mount to get them used to the trail, a dog can seem like a loud and scary threat.

Also make sure to keep in mind your dog’s needs. Pack food and water for them, especially if you’re traveling overnight, and no matter the length of your adventure, make sure you bring doggie bags. Because of what they eat, dog poop doesn’t break down in the same way as other animal waste, so it’s important to pack out what they drop on the trail—and that means carrying it with you, not leaving a full bag on the side of the trail so you can pick it up on your way back. It’s gross and inconsiderate, and you run the major risk of forgetting it. If the thought of carrying your dog’s poop in your pack grosses you out, invest in a doggie backpack so they can carry it themselves.

We’ve already covered why you shouldn’t pick wildflowers or go off-trail—Colorado’s ecosystem is delicate in places, especially at higher elevations where plants take a long time to grow and spread. Of equal importance is why you should keep your distance from wildlife. That elk might look calm and majestic when he’s grazing in a meadow, but the second you get in his personal space for your Instagram shot, you’ll see those antlers in a whole new light. Interfering with wildlife is dangerous for humans, but also for the animals. When creatures like bears lose their fear of humans and start to venture into populated areas looking for food, they sometimes have to be killed to stop them from becoming more of a danger. Again. Don’t be that person. Leave the wildlife wild.

The Rules of Nature

We know, it can seem almost counterintuitive for there to be so many rules about spending time in the great outdoors, but most of these pieces of etiquette boil down to two goals:

1. Letting others enjoy their hike just as much as you are
2. Preserving nature for wildlife and future hikers

Pretty noble, right? Keep those two things in mind next time you’re out on the trail and the rest will fall into place. Happy hiking!