Explore Ancient Pueblo Culture at Aztec Ruins National Monument in Aztec, New Mexico. If you are in southwest Colorado, Aztec is just south of Durango on highway 550.

Looking for a family-friendly excursion that’s a little off the beaten path yet within easy access? Aztec Ruins National Monument is located just over the New Mexico state line on the Animas River in the quaint town of Aztec. Aztec Ruins was designated a World Heritage Site in 1987 as part of the Chaco Culture World Heritage Site because it preserves important Pueblo architectural and engineering achievements. 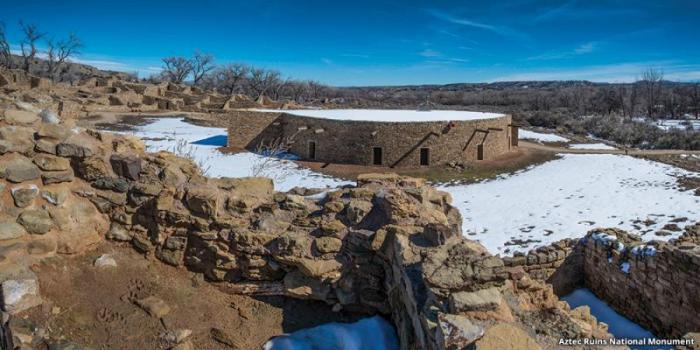 Aztec’s first inhabitants were influenced by Chaco architecture, ceramics, and ceremonial life. At first, Aztecs may have been a place that supported Chaco activities located 55 miles south. Later it may have been a center in its own right when Chaco Canyon’s influence waned after 1100.

Aztec population decreased at times yet persisted through periods of drought and cultural changes. Even after many generations, the community’s final layout reflected a master plan set out by the first builders. The number, variety, and massive scale of these structures concentrated in such a small area are incredible. These features' placement, orientation, and relationship strongly suggest that the builders carefully planned this community.

When construction ceased in the late 1200s, this community consisted of a whole complex of multi-storied great houses, tri-walled kivas (one of only a few in the southwest), small dwellings, roads, and the “Great Kiva”. Kivas are round subterranean structures used for community ceremonies that were central to the Ancient Pueblo culture. Reconstructed in 1934, the “Great Kiva”, which is 48 feet in diameter, is the oldest and largest rebuilt kiva in North America. 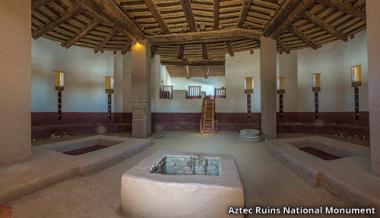 The West Ruin, which is open to the public, once had more than 500 rooms centered on an open plaza. Many of these structures still possess their original 900-year-old roofs! Inside these rooms, many artifacts offer a look into how these ancient people lived. Many of these artifacts are now located in the Aztec Ruins Visitor Center museum.

No one knows for sure why the people abandoned the community in the 1200s. Perhaps it was drought or social, religious, or political issues. Maybe it was wanderlust that led them to move south to the Rio Grande drainage and west into Arizona, where their descendants still live today. But when they moved, they left well-preserved structures and artifacts that helped to tell their stories. Today many southwest tribes, descendants of these ancestral Pueblo people of Aztec, maintain cultural and spiritual ties to this site.

Things to do when you go:

1.  Take the self-guided tour through the complex and explore the structures of the people, including the reconstructed “Great Kiva” and the Hubbard Tri-walled site. Get a feel for what it must have been like for the ancient Pueblos.

2.  Explore the museum inside the Aztec Ruins Visitor Center.