Mavis Staples is an alchemist of American music and has continuously crossed genre lines like no musician since Ray Charles. Weaving herself into the very fabric of gospel, soul, folk, pop, R&B, blues, rock and even hip-hop over the better part of the last 60 years, the iconic singer has seen and sung through so many changes, always rising up to meet every road unwaveringly.

At the beginning of her eighth decade of singing truth, Mavis Staples has delivered a new recording, If All I Was Was Black, featuring ten songs about America today where the present is filled with ghosts of the past. This is her third collaboration with songwriter and producer Jeff Tweedy and marks the first time Tweedy has composed an entire album of original songs for Mavis’ legendary voice and a nation she’s uniquely poised to address. 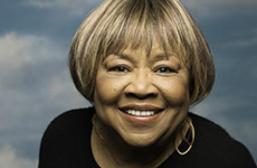