Rodney Carrington is a multi-talented comedian, actor, singer and writer who has recorded eight major record label comedy albums, which have sold millions of copies. Carrington has also released three new albums on his own record label called Laughter's Good Records. An album of new songs and material entitled “Laughter's Good” debuted at No. 1 on the Overall Comedy Charts. The same week, the re-release of “Rodney Carrington Live, C'mon Laugh” You Bastards debuted at No. 2 on the Overall Comedy Charts. He then went back into the studio to record The Hits which also reached No. 1 on the comedy charts. The album features a duet with Colt Ford on a new version of the song “Titties and Beer”. According to Pollstar, Carrington has been one of the top ten highest grossing touring comedians for the last ten years and among the top 5 the last several years. Carrington is on track to be in the top 5 again this year as he regularly performs to sold out crowds across the U.S., Canada, and even Australia. 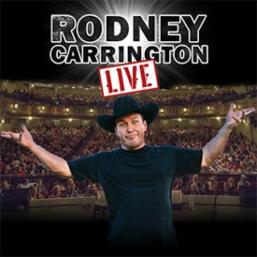