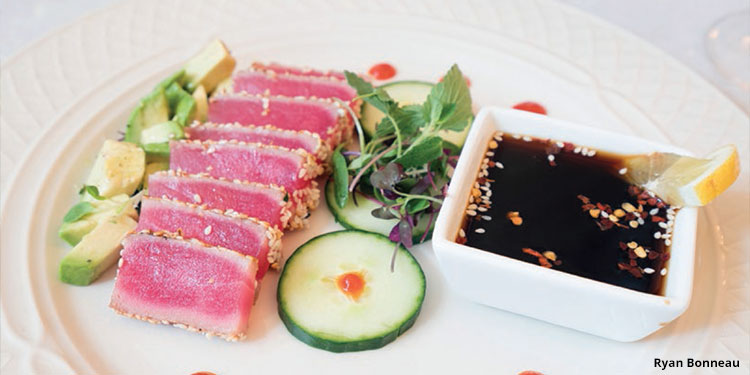 The Bounty of the Season

Stop in at Sidework to sample the ever-changing menu that centers around comfort food with a contemporary twist. Outside, the restaurant on South Pine is low key. Inside the eclectic menu has influences ranging from Mediterranean to southwestern Colorado, and dishes that depend on the bounty of the season. There are fixtures like the charcuterie board with house-made sausages, a raw bar and a lamb pot pie with Colorado lamb in a red wine reduction, as well as specials like an olive oil- poached sea bass or eggplant rollatini. The to-die-for food is complemented by craft beers (Sidework’s owners, Josh and Melissa Klein, also have Smugglers Brew Pub next door), inventive cocktails and a wine list that is well-balanced between Old and New World labels. All of this goes down in a beautiful space that evokes mid-20th century Americana. The Kleins say they are enjoying the mix of visitors and locals who are finding their way to the restaurant. Says Josh, “I’m excited for the summer. We are getting lots of local support and then there are the people in town for the festivals. It’s very cool.”

Next time you go to a show at the historic Sheridan Opera House, don’t forget to spend some time at the new Show Bar. The Sheridan Arts Foundation recently transformed a ground floor space into a bar replete with red high-backed bar stools, an authentic 19th century Brunswick Bar and two flat-screen televisions that will simultaneously screen SOH shows. The menu boasts all sorts of drinks, including Telluride Brewing Company beers and cocktails named after foundation board members. The Show Bar is open to ticket holders on performance nights and to the public on weekend nights when there are no scheduled shows. The bar promises to be a welcoming place to grab a drink for SOH audiences attending everything from Nightgrass concerts to raucous ski-movie screenings to Telluride Theatre performances.

Welcoming and Historic, Sleek and Hip

There’s a new “Bean” in town. After over a year of renovations, the historic building beside the New Sheridan Bar is now home to The Phoenix Bean, a coffee shop whose name harkens back to the 1880s when the spaced housed LL Nunn’s Phoenix Market, and is also a nod to the previous occupants, The Steaming Bean. The new coffee shop is sleek and hip, with stainless steel tables adjacent to burgundy booths and a retro jukebox. The walls are adorned with a Colorado flag painted on a wooden frame and segments of a topographic map from the area. The Phoenix Bean serves only Steaming Bean Coffee Co. coffee alongside fresh smoothies and teas as well as a light breakfast and impressive array of salads, sandwiches, egg skillets and small plates. Open until 9 p.m., the Bean serves alcohol and is an intimate but lively venue for live music on Friday and Saturday nights and trivia on Tuesdays. 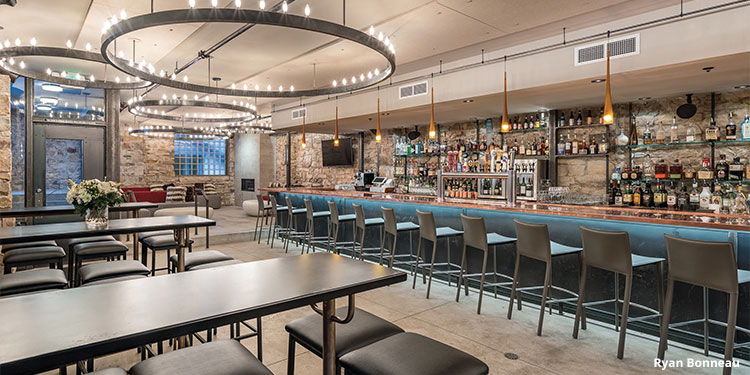 A little like Telluride itself, new bar the Liberty has quickly become a favorite with, well, everyone. Sidle up to the 30-foot-long copper-topped bar in the beautifully renovated space on South Fir Street and order a craft cocktail, local brew or glass of wine or champagne. Or, grab a group of friends and lounge on a comfy couch, catch some live music, or find your inner Adele on open-mic night. A lot like Telluride, the Liberty is the place to be.

The Peaks’ restaurant Altezza, Italian for height, has a new menu to match its spectacular views. Executive chef Matt Janney and team are serving Indo-European-inspired fare with New World-themed entrées, as well as small plates for Happy Hour. Also at the Peaks, check out the Bean Café with Telluride Coffee Roasters coffees, fresh-squeezed juices, homemade pastries and more.

In Telluride This Summer

Top Chef, the Bravo channel’s cooking competition, is heading to Telluride this summer. The series, where culinary artists duel it out for the famed Top Chef award, will also film episodes in Denver and Boulder for a Colorado-based 15th season. Want to see Telluride on the small screen? Episodes will air in the fall.

Telluride's restaurant scene dishes up a culinary tour from elegant Thai, to healthy Middle Eastern on the go, to delicious and innovative sushi.

The Concept > Located in Mountain Village at an altitude of 9,545 feet. A spot where oxygen might be in short supply but not fresh ingredients. Fresh fish is flown in daily. Handwraps are crafted with dexterity and flavor. Hot outside? Need a beverage? Just say, “Phuket Cooler”.

We are Intrigued by > Panang Short Ribs

The Concept > Orchids are edible. Apparently. So say the benevolent staff. But with the wide ranging flavors served at Siam there is really no need to eat the decoration too. Artful and delectable, Siam serves food for those with a gluttonous, as well as adventurous palate. Try anything with duck or coconut in it … try everything.

We are Intrigued by > The Nipple Platter

The Concept > Fast, affordable, mostly organic and healthy. Eat among the mountains on the outdoor patio. A meat eater will be sustained by kebabs naturally raised and free from chemical additives. Caravan also caters to the vegan, the vegetarian and the gluten-free. It’s a smoothie haven too with all organic ingredients.

We are Intrigued by > Vegetarian Sampler

The Concept > Under new ownership, the Shanghai Palace now has gluten-free and MSG-free options upon request. Occasionally, after dining hours, you will find a local DJ spinning in the back with more of a night life in the front. Still very much family friendly with large portions and reasonable prices, the Shanghai Palace is a quality Telluride staple.

We are Intrigued by > Volcano Shrimp

The Concept > The only sushi bar in town. A pescatarian haven. From traditional edamame bowls to sliced jalapeño peppers served on top of yellowtail and fresh rice. The Baconator Roll has, you guessed it, bacon on it (among other things). Leave some room on both ends of your meal for a Kobe beef appetizer and wasabi ice cream, respectively.

We are Intrigued by > The Baconator Roll, of course