Can You Take Me Higher? 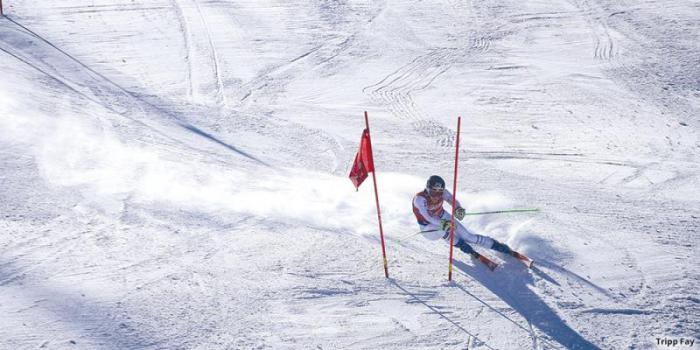 A guide to getting better at everything winter.

When I moved to Colorado back in the late 1990s, I thought I was a hardcore athlete because I’d just spent the past few years living in a remote wilderness town in Alaska. There, I holed up in a cabin I’d helped build, skied to my job at the local mercantile, and dog mushed a team of 25 huskies. But it took no time at all for me to learn that in a place like Colorado, my years of living close to the land didn’t even come close to qualifying me as an uber-athlete. I figured this out on the first day I skied here, in 1997.

Yes, I was strong, but I found myself surrounded by people ripping several-thousand-foot lines; shredding untracked powder into fettuccini-like ribbons. I later came to call that winter my Baptism by Colorado Fire. I’d arrived in January, and by April was well on my way to becoming a super-athlete. That’s because from that first day on, I took every opportunity I could wrangle to explore and expand my winter sporting. After Humiliation Day, I traded my old, these-will-get-me-by alpine skis for a brand new telemark ski and boot setup. I also invested in a pair of climbing skis and an avalanche beacon. With said new gear, I then had to learn to use it. So I tracked down and took a class on avalanche awareness.

Soon, I was shredding the resort, and also touring in the backcountry. On days when I didn’t feel like doing either, I was embracing my newfound love of skate skiing, something I’d also tried in Alaska, but didn’t really learn until I took a lesson in Colorado. And I was snowshoeing. I was mogul skiing. I was winter running. The list goes on. And better yet, when I later returned to Alaska a new and more well-rounded athlete.

My point: Even if you think you have your winter sports routine dialed, you can always up your game. Meaning, if you’re a seasoned alpine shredder, or a diehard cross-country enthusiast, or even a veteran backcountry tourer, there’s always room for improvement. Doing so will increase your confidence, expand your horizons, and give you massive—and legitimate—bragging rights.

Here in Frisco and Copper Mountain, opportunities to take your game to the next level are boundless. 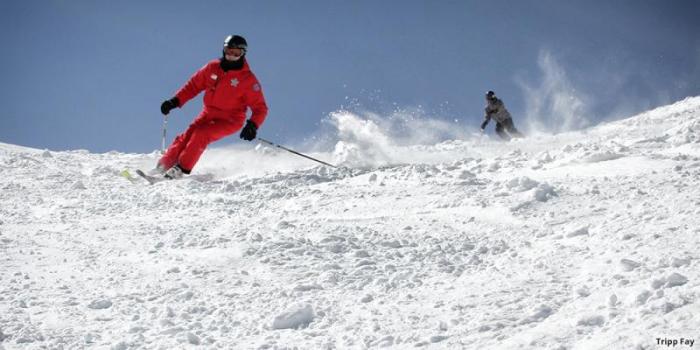 If You Love: Straight up skiing and/or snowboarding

Take It Up A Notch with Copper’s private, 100-percent-tailored-to-you ski or snowboard lessons, built with your specific needs in mind. There’s no set schedule—if you want to spend all day perfecting one technique, perfect. And instructors are up for the requesting, meaning if you’ve heard that Tad from Tuskegee gives the best steeps-skiing lessons, just ask the desk for Tad from Tuskegee (note: Tad is fictional).

Head to the hill for a three- or six-hour lesson. The day’s flow is totally up to you—ski til lunch, load up, and then head back out until 3 or 3:30. Work on skill as much as you want, or let your instructor act more like a guide, pushing your skiing in terrain you’ve never visited.

The Payoff: All that private time with someone who’ll watch your skiing, analyze it, and make you better (Thanks, Tad) will play out on the mountain for the rest of the season. CopperColorado.com

If You Love: Skiing all kinds of terrain, but moguls stump you

Take It Up A Notch: Olympic bump champ Jonny Moseley will tell you mogul skiing is not the most relaxing on-snow discipline. No matter. Once you get the hang of it, you’ll have access to a whole new side of the mountain. Start learning the bumps with Copper’s two-day Bump Busters. You’ll learn from competition-level instructors who love to zipperline through mogul fields.

They cover balance, body position, etiquette, safety, line choice, mental focus, and energy when skiing mogul terrain. Better still, you’ll get that quick-reflex, point-em-and-run adrenaline rush that’s several notches above the one generated by groomer skiing. And good bump technique improves your all around skiing technique by making you react faster to oncoming terrain, ski more fluidly and adopt a better stance for protecting your joints.

The Payoff: More fun on more runs and better skiing all over the mountain. CopperColorado.com

If (You're a Kid and) You Love: Winter, snow and the thrill of learning multiple new sports

Take It Up A Notch by joining this competitive ski program, which focuses on introducing kids to all skiing disciplines and then helping them decide which to compete in. “That’s because most kids are basically funneled into the sport their parents do, when they might want to do something completely different,” says Team Summit Executive Director Jerry Karl.

He and his fellow coaches try to get kids to identify their “personal podiums,” or winter sports goals. The youngest kids—ages six to 10—spend 16 weeks in the Find Your Passion program which introduces them to park and pipe, big mountain, mogul skiing, and traditional ski racing events (slalom, GS). Most naturally gravitate toward one of these, says Karl, and that’s when Team Summit’s race coaching begins. Racers train from November through April (Copper is home to the U.S. Ski Team Speed Center, the only full-length downhill course in America) and race in the USSA-sanctioned competitions. School-age athletes can also partake in the Academic Athletics Program, which lets them blend academics with training and competing.

The Payoff: Karl says the goal isn’t necessarily to make them champions, but to teach them the techniques that will later make them incredible skiers for a lifetime. teamsummit.org 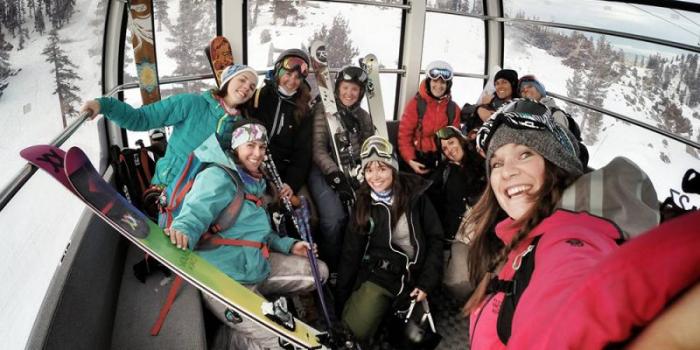 If (You're Female and) You Love: Communing with women—plus, the thought of skiing into the backcountry armed with the knowledge to keep yourself safe

Take It Up A Notch with a one-day avalanche awareness clinic offered through Copper’s SAFE-AS organization. SAFE-AS was conceived by a group of the ski industry’s hardest charging female skiers, including Lel Tone, Elyse Saugstad, Jackie Passo, Ingrid Backstrom, Michelle Parker and Robin Van Gyn. Combined, they have 100-plus years of backcountry experience. They’ll lead you through a short yoga session (to wake up the body and mind) before endowing you with the basics of staying safe in the backcountry.

Some topics include: researching the avy forecast in the morning; checking beacons prior to departure; and assessing the snow pack in the field to determine whether or not to ski it. Eat lunch. Then head outside for an afternoon of companion rescue drills and hands-on learning of how to properly use your avalanche rescue equipment.

The Payoff: “Our après ski raffle tops off the day,” says Parker. “But the big winners are everyone who learned skills to ski in the backcountry safely.” CopperColorado.com

The Colorado Avalanche Information Center offers avy awareness classes at the start of every winter in various towns across Colorado, including Frisco.

Learn the basics there, buy a beacon and shovel, and then head to the town of Frisco’s Avalanche Beacon Park, to practice. Located in the Frisco Adventure Park, the beacon park allows backcountry users to test new beacons and their skills before heading out into the backcountry and finding themselves in a serious situation.

If You Love: Alpine skiing, endurance sports, and the thrill of racing

Take It Up A Notch by joining the Summit Skimo ski mountaineering club. “Ski mountaineering is a full-body workout in which you’re earning your turns by climbing peaks and then racing back down, all on specialized gear designed for speed and efficiency,” says Vice President Ram Mikulas.

Though their main focus is kids, they appeal to skiers of all ages. I’ve done a couple of skimo races and the best part is how cleansed you feel after incinerating calories on courses that can climb 5,000 feet over 3.5 miles.

The Payoff: “Fitness and fun,” says Mikulas. “And pushing yourself in a mountain environment in ways few people do. It’s unique and demanding, so you feel cleansed and exhilarated.” summitskimo.com

If You Love: Kicking your significant other’s derrière—at every possible opportunity

Take It Up A Notch: Meet your friendly foe at the top of the NASTAR course on the Copperopolis Trail at Copper Mountain. Here’s a fact few non-NASTAR racers know: Olympic medalist Ted Ligety is the current Nature Valley NASTAR National Pacesetter. That means his time is the National Standard. So each time you race a NASTAR course, you are racing against Ligety, with your “handicap” being the percentage your time falls behind his. But when you’re on course, racing your loved one, no doubt you’ll be thinking about other things.

The course is 350 meters long, with 17 to 20 gates. To race, you must register at nastar.com or at the course at Copper. Now, simply pay your entry fee and give the starter your registration number. Hands forward, aggressive stance, pressure in the front of your boots and turn early around each gate. Cost is $6 for 1 run, $10 for 2, or $15 for unlimited.

The Payoff: You. Smearing your boy (or girl) friend’s name all over town that evening. And making them buy all of the drinks. nastar.com

If You Love: Nordic skiing, i.e. cross-country, plus the calorie-torching nature of high-intensity sports like trail running, sprint-distance triathlons, or mountain biking

Take It Up A Notch by trying the highly aerobic, challenging-to-learn but oh-so-rewarding sport of skate skiing. Nailing the technique—which mimics speed skating but with poles and on glide-waxed skinny skis instead of ice skates—is a challenge, but once you do, you’ll reap the benefits of zipping around on trails groomed to perfect waves of corduroy.

The benies include blissful quiet (Nordic trails attract fewer skiers than resorts), solace (oftentimes it’s just you and the random moose) and one of the best forms of exercise known to man (some estimates put the calorie burn of skate skiing in the 800-an-hour range).

And if you’re in the Frisco area and want to learn, certified instructors at the Frisco Nordic Center, owned and operated by the Town of Frisco, offer lessons on 27 kilometers of terrain that varies from wide-open, easy greens like Tex’s Trot to steeper, more challenging climb-and-then-bomb blacks, like the 3.5-kilometer Judy’s Nugget. Group and private lessons are available for both classic and skate skiing.

The Payoff: As you fly down those glistening corduroy trails, you’ll burn fat, build muscle and, likely, extend your life, since new research shows that short bursts of cardio, which skate skiing requires, are the best form of exercise. FriscoNordic.com 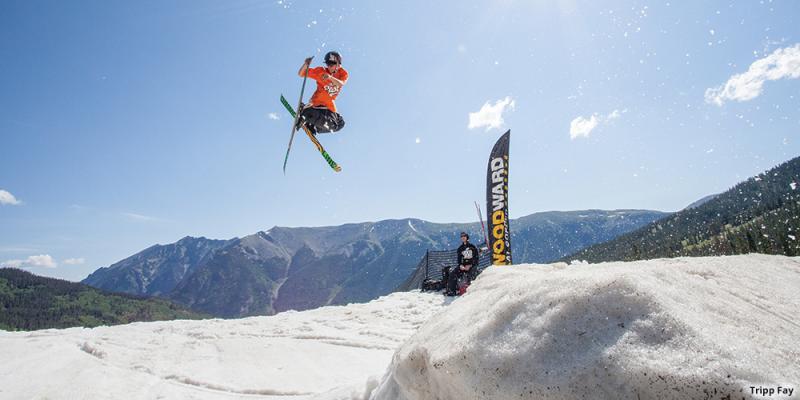 If You Love: The feeling of air under your skis when you accidentally boof off the top of a roller run

Take It Up A Notch with a beginner lesson at Woodward Copper, where the motto is “progression is inevitable.” Woodward is an action sports training facility for all ages and abilities. They offer year-round snowboard, ski, skateboard, bike and digital media programs. You meet at The Barn, a 19,400-square-foot indoor facility filled with Skatelite (think hardwood surface) jumps into foam pits, Olympic fly-bed trampolines, and a Super Tramp—16’ by 16’ and allows you to double your air time The bounce is slower, which simulates being in the air off of a jump. All beginner lessons (ages 6 to 110) spend the morning in The Barn and the afternoon in Woodward’s terrain parks.

The Payoff: No matter what your goal is, from hitting a jump switch to doing a 540 fakie, you’ll have a blast doing backflips onto the tramp or launching into the foam pit on Woodward’s specially crafted Parkboards and Parkskis. woodwardcopper.com

Woodward’s Park Rats program, running in four-, eight- or 12-week sessions, gives kids ages six to 18 multiple opportunities to progress over time, as they meet with the same professional coach for the whole session and work on tricks that match their skiing or snowboarding ability.