Enrich your train journey by meeting the folks who settled the West!

The Durango & Silverton Narrow Gauge Railroad (D&SNGRR) offers guests an opportunity to receive a deeper understanding of what they are seeing and experiencing through historic narration. As they travel, passengers learn about the building of the railroad and the real people whose lives were interwoven into the settling of the area. The Narrators are professional historians who relate tales in first-person narrative, dressed in period clothing and accessories historically accurate to the character and the era. Through authentic accounts of their lives, the character’s stories will entertain you and through documented facts will enlighten you about the scenery and the historical significance of the area. 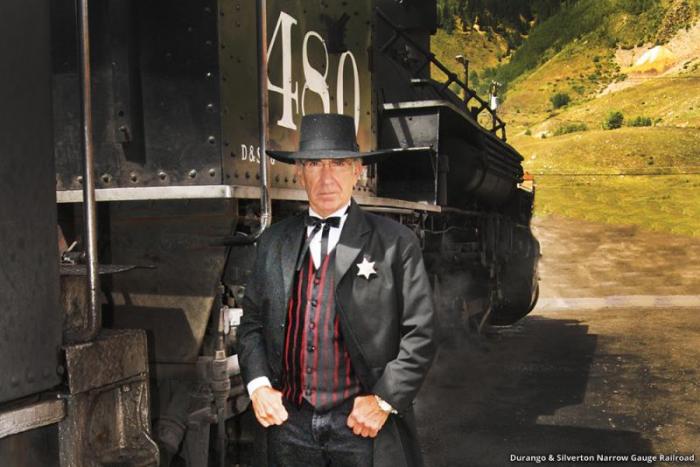 Some of the characters you may hear from include:

with her husband and children, homesteaded in the Animas Valley in 1875. They sold beef, potatoes, butter, and other food supplies to the miners up in Silverton. Learn about ranch life in the area and some of the cowboy stories that really happened in the early days of “wild” Durango!

General William Jackson Palmer was an American civil engineer, soldier, industrialist, and philanthropist. After serving in the Union Army during the Civil War, he came west and founded the Denver & Rio Grande Railway and constructed the 45-mile line between Durango and Silverton 1881-82.

Victoria Day was the wife of a noted newspaper editor, David Day. She was a businesswoman in her own right, an early woman entrepreneur, something quite unusual for a 19th-century lady.

Otto Mears was known as the “Pathfinder of the San Juans” because of the hundreds of miles of road and railroad projects he built throughout Colorado’s San Juan Mountains in the late 19th Century. His daughter, Cora Mears Pitcher

, the last president of Otto’s Silverton Northern Railroad, may also climb aboard to share her father’s incredible story.

Thomas Graden was a Civil War veteran who came to the San Juans to make his fortune, not in mining but in a myriad of other business activities. He built roads, provided lumber to the new towns and railroad ties to the Denver and Rio Grande Railroad, built the finest mercantile in Durango, owned a flour mill, and even started the first electric company in Durango in 1885.

Robert Dwyer was an Animas Valley pioneer, miner, rancher, La Plata County Sheriff, and the first marshal in Durango. He left an indelible mark on the community he helped develop. “Bob” Dwyer’s leadership brought together a diverse community of railroad developers, miners, ranchers, and Ute Indians residing in the valley.

Caroline Romney was a pretty, 40-year-old widow when she decided to haul her printing press across the mountains from Leadville, CO to start Durango’s first newspaper in 1880. Mrs. Romney was the embodiment of the successful frontier woman and became an inventor of such items as foot warmers for railroad cars.

Climb aboard one of our Historic Narration Coaches and learn about the history of the area and the railroad!

The Best Off-Season Fall in Colorado

Fall Activities to Get You Ready for WinterAs temperatures drop and snow begins to blanket the Rockies, it’s getting to be that time of year where your camping gear gets stashed, but winter sports haven’t kicked into high gear yet. However, the fall...
Read More