The Evolution of a Sport

With origins dating back to 2500 BC, the face of skiing has changed dramatically through the years. Once simply a mode of transportation, skiing has been used in military training and 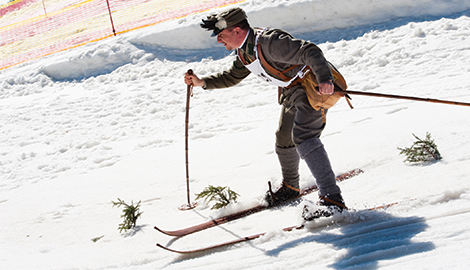 combat, as a form of recreation, and as a competitive sport. From long boards to short "fat" skis, telemark skiing to alpine skiing, ski jumping to slalom racing, skiing is more popular than ever before. And here in the Colorado high country, it lives on, not just as a sport, but as a thriving way of life.

Emergence of Skiing in Colorado

While the European sport and recreation skiing scene was quickly carving a popular niche at the end of the 19th century, skiing in Colorado and much of the West was emerging out of necessity. By the late 1800's, Colorado's high country was bustling with miners searching for the big strike. Men, many with families in tow, came from all over the world in search of a grand fortune, and they arrived to find a beautiful and harsh environment. Towering peaks and heavy snowfalls made travel by wagon, train, or horse difficult, if not impossible at times. Scandinavian miners who joined the influx of immigrants offered a solution. They taught their fellow mountain dwellers how to craft skis and use them to travel through the snow, whether it was simply to ski to town to pick up supplies, ski to school or visit friends.

The group that has had the greatest impact on Colorado's ski history and most famous for ski travel in the mining days were the mailmen. These hardy individuals lashed on eleven-foot wooden boards, threw 25 pound mailbags on their backs, and traveled from one mining camp to the next, often over dangerous mountain passes in the dead of night when the crusty snow made traveling easier. Skiing soon emerged as a form of entertainment. Jumping and racing contests were established in camps to pass the long winter days. As the century came to a close and mining began to dwindle, skiing gained momentum as a sport and a form of recreation. Clubs sprang up throughout the state. As interest grew, so did the sports clubs' membership, which led to an increase in competitions but also provided companionship for a casual day on the slopes.

In the decades to come, a growing interest in alpine skiing, innovations in ski equipment, an increasing number of national and international events, and the U.S. hosting the 1932 Olympics in Lake Placid led to a soaring interest in the sport. Small ski areas popped up around Colorado, and in January 1940, the first major ski area in Colorado was dedicated at Winter Park.

As tragedy struck when the Japanese bombed Pearl Harbor, the nation's focus naturally shifted away from recreational pursuits. However, during the war years, skiers in Colorado were still getting out on the mountains, even if the towropes weren't running. In fact, the war would be a major factor in the soon-to-come Colorado skiing boom.

In 1941 the 10th Mountain Division, comprised, in part, of former collegiate skiers, coaches and Olympians, was established for military combat on skis. About 14,000 men trained at Camp Hale located near Leadville between 1941 and 1944.

Training for the 10th Mountain Division included snowshoeing, skiing, high altitude survival and cold weather training. To help the troops battle the elements, gear was subsequently revolutionized, and many of the innovations that sprung from Camp Hale provided models for modern day equipment. For instance, the men wore an all-around boot designed for use when skiing, snowshoeing, hiking or climbing, and ski bindings could be used for either downhill or cross-country skiing.

The 10th's most notable tour of duty was in Italy, a mission that eventually led the Germans to surrender. In a night assault, 10th troops climbed 1500-foot sheer cliffs thought impassable, and took the ridge which was a key position in German defense.

With the war behind them, the troops of the 10th headed home, but many sought the mountain lifestyle they enjoyed during their tour of duty. In Colorado and throughout the West, former 10th Mountain Division soldiers discovered their own pieces of heaven, and many opened ski areas or helped run existing ones. To date, close to 60 ski areas in the U.S. have been constructed and/or founded by veterans of the 10th Mountain Division.

As the post-war economy boomed in the U.S., so did skiing. Ski areas installed lifts and T-bars, and night skiing was even instituted in Colorado with the first lighted runs at the Continental Ski Area on top of Fremont pass. In addition to attracting a flood of recreational ski enthusiasts, Colorado was also attracting major competitions. In 1950 Aspen hosted the World Alpine Ski Championships which marked the coming of age for skiing in this country.

The Age of Modern Resorts

Unlike the European ski scene that developed around existing summer alpine resorts that simply extended their season to accommodate the sport, Colorado ski areas lacked resort status. Restaurants, lodging, and parking did not exist at most ski areas, and it was only Aspen, with its Jerome Hotel, that could claim resort status In order to meet the rising demand, resorts at Breckenridge, Vail, Crested Butte and Steamboat Springs rose rapidly with great success. By the early 1970s Colorado had earned its status as a prime skiing destination and paved the way for more resorts to open up including Telluride, Keystone and Copper Mountain.

The sport of skiing, long associated with Europe's upper-crust, was gaining "elite sport" status in the U.S. The large resorts catered to people hoping for a posh destination vacation, which gave skiing an air of sophistication. Yet the ingenuity of a few "garage" and "backyard" invent-ors would add a fresh new element to the ski resort experience. By the mid-1970's a handful of innovators -- Jon Burton, Mike Olson, Bob Webber, Tom Sims, Sherman Popper and Dimitri Milovich -- had each developed what would evolve into the modern snowboard. By 1981, the first snowboarding competition was held at Ski Cooper in Leadville, Colorado, and ski areas have never been the same since. Resorts that once subtly snubbed their noses at the enthusiastic riders, are now catering to their interests. Half-pipes and snowboard terrain parks have been built throughout the state, and many resorts host snowboard competitions that receive worldwide coverage. Though the sport is still relatively young, it is sure to be a force on the mountain for decades to come.

With continuing innovations in ski technology, expanded terrain, and a world-class resort experience, skiing in Colorado just seems to get better and better. More than just the cash cow of the state's economy, skiing is sacred to many Coloradoans and those who travel here to live the mountain lifestyle. Though the sport will continue to undergo countless innovations as we move into the 21st century, there is a sense of certainty that skiing will remain for many, not just a sport, not just a form of recreation, but the only way of life.