It’s not a haunted park, a big blue bear, or a horse with glowing red eyes, but Colfax Avenue is one of Denver’s major landmarks just the same. This vibrant and colorful street was once infamously called the “longest, wickedest street in America,” a quote frequently attributed to Playboy magazine. At 26.5 miles long, it is the longest commercial street in the United States, stretching through Aurora, Denver, Lakewood, and Golden, but if you count the rest of it after it stops being a commercial district, Colfax Ave clocks in at over 53 miles. Colfax is home to some of Denver’s most iconic businesses, music venues, and bars—everything from Casa Bonita to the state capitol building—but its history goes back a lot further than that.

Like much of Colorado’s history, Colfax Avenue’s starts with the Colorado Gold Rush in the 19th century. The long dirt road which led from Denver to Golden was named “The Golden Road,” and served as a major thoroughfare in and out of the mountains. (as one of its other common nicknames, “The Gateway to the Rockies,” implies) The name changed to honor Schuyler Colfax, an Indiana lawmaker who was instrumental in Colorado attaining statehood, and who eventually became vice president under Ulysses S. Grant.

While it was an important part of Golden’s infrastructure, the road never became quite as entwined in its community as it did further east in Denver and Aurora (then called Fletcher). As Denver grew, so did Colfax Avenue, quickly becoming an arterial street of Colorado’s capital city. And, truly befitting of its Wild West reputation, it quickly became home to saloons, brothels, and other houses of ill repute. By the end of the 19th century, Colfax had a trolley car which ran up and down the street, and hundreds of visitors, both locals and tourists, every day.

Eventually, Colfax became part of the US 40 Interstate, which in its heyday ran from San Francisco on the West Coast all the way to Atlantic City on the East Coast. This meant it became a busy street full of traffic by the 1950s, and all those visitors on Colfax meant there was great opportunity for business. Many of the prominent and eye-catching neon signs you see on Colfax today originated during this time, designed to catch attention from travelers who had been in the car for hours and needed a break, and soon the bright lights on restaurants, bars, music venues, and motels became a landmark of the street.

And then in the 60s and 70s, I-70 was built, and Colfax, no longer the main street it had once been, fell into disrepair. Once the tourists stopped coming to Colfax, many of its businesses and landmarks declined, leaving room for some of the images we associate with the street today, of abandoned lots and dilapidated buildings, of prostitution and drugs. Zoning laws from the 1920s that were much more liberal than other parts of Denver meant Colfax was a prime location for adult businesses—a term that encompassed the gamut of tattoo parlors to strip clubs—to set up shop. 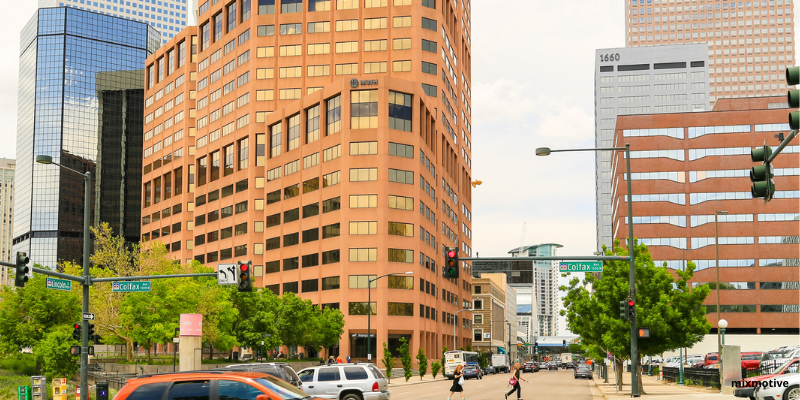 These days, Colfax is split into several sectors, but the main stretch just east of downtown Denver represents a sort of grungy-chic part of the city, full of bars, tattoo parlors, shops and boutiques, breweries, dispensaries, and loads of people. It’s a strip of Denver that prides itself on being unique, historic, and a little bit rough around the edges. The Number 15 bus line, which runs down much of Colfax, has the most ridership of any bus line in the RTD system. After being considered an “undesirable” part of town for so long, Colfax has worked hard in recent years to regain its vibrancy by supporting new small businesses as well as many of its classics. While some still actively avoid the area, they’re seriously missing out, because Colfax, more than possibly any other part of Denver, is filled to the brim with personality, and it’s home to some incredible parts of Denver’s history. Whether you’re looking for live music, great food, craft beer, or some of the most interesting people you’ll ever meet, Colfax has got it in spades. Some of the iconic businesses along Colfax Avenue Include:

The pandemic has taken many classic businesses before their time, like the Denver Diner which shut its doors in January 2021, but so too has gentrification, as it did to Tom’s Diner (Colfax has a lot of diners—spoiler alert, they’re all great), which will soon be the site of a restaurant and entertainment venue, and to many of the people who have called Colfax neighborhoods their home for decades, primarily immigrant communities and people of color. It’s an ugly side to the revitalization of the neighborhood, and one we shouldn’t ignore. Colfax has gone through many phases in its life, from the brothels and strip clubs of its past to the artisan boutiques and hipster bars of its present. But vestiges of each of those phases can be found up and down the street, in small ways like Aladdin Liquors, just down the block from the site where the Aladdin Theater once stood, and in more notable ways like the neon signs of Pete’s Kitchen and the bright marquees of historic music venues, which still stand proud between the craft breweries and expensive new condominiums.

Colfax is changing, but then again, it’s been in a state of change for all of its 150 year history. It’s that change, and that eclectic mix of past and future—of hair salons that were once brothels and neon signs advertising the best pancakes in town—that will keep this iconic part of Denver delightfully weird for a long time to come.